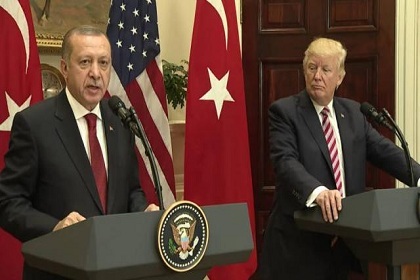 Relations between Turkey and the United States are at their lowest ebb in recent times, with President Donald Trump announcing Friday he had doubled steel and aluminum tariffs against the NATO ally, adding to the Turkish lira's downward spiral.

The United States originally imposed the tariffs in March, in response to Turkey's failure to release American pastor Andrew Brunson who has been held in jail and now under house arrest for almost two years.

But the Brunson case is far from the only area of tension bedeviling relations between Washington and Ankara, with a list of other disputes scotching hopes of any rapprochement under Trump's presidency.

Turkey's increasingly cosy relationship with Russia and President Vladimir Putin has alarmed both the United States and the European Union, in particular a deal for Ankara to buy Russian S-400 air defense systems.

Despite being nominally on opposite sides of the Syrian conflict, Ankara and Moscow have since late 2016 been working on a peace process aimed at ending the civil war.

The U.S. Senate has passed a defense authorization bill which notably prohibits the delivery of F-35 Joint Strike Fighter aircraft to Turkey over the S-400 purchase.

But Ankara has threatened to apply international arbitration if the delivery does not go through, warning the U.S. that Ankara had legal options to challenge any block.

Turkey is increasingly frustrated that the United States has failed to hand over Fethullah Gulen, the exiled Muslim preacher Ankara blames for the 2016 attempted coup, so he can face trial at home.

Gulen, who has lived in self-imposed exile in Pennsylvania since 1999, strongly denies the charges.

The U.S. says the conditions to detain or return Gulen have not been met, according to American law.

Brunson is not the only prisoner whose detention by Turkey has angered the U.S.

Several Americans were caught up in the crackdown that followed the failed coup, including NASA scientist Serkan Golge, a dual national, who was jailed for seven-and-a-half years in February for being a member of Gulen's movement.

Two employees from U.S. missions in Turkey remain in custody on terror charges and another under house arrest.

Turkey in turn has been furious over the conviction of Mehmet Hakan Atilla, 47, deputy director general of Turkish lender Halkbank, in January by a U.S. federal jury in New York for helping Iran evade U.S. sanctions on billions of dollars of oil proceeds.

The trial had heard testimony which implicated Erdogan and other officials in the scheme. The president called the case a "plot" against Turkey.

Media reports, including in the pro-government Daily Sabah, have suggested Turks and Americans discussed swapping Atilla, who was sentenced to 32 months in jail, for Brunson.

Halkbank also faces a massive fine from the U.S. Department of the Treasury.

A still unresolved issue is U.S. support for the Syrian Kurdish People's Protection Units (YPG) militia, which controls much of northern Syria after ousting jihadists but Turkey regards as a terror group.

In January, Turkey launched an offensive supporting Syrian rebels against the YPG in its western enclave of Afrin, despite U.S. calls for restraint.

Ankara repeatedly threatened to take the operation further to the YPG-held city of Manbij where there are U.S. forces but, thanks to a flurry of diplomacy, the NATO allies produced a joint "roadmap" in May to coordinate security and avoid a clash.

But Aydintasbas said there was now the risk of a "pause" on Manbij. "I don't see how the (Manbij timetable) could work out with U.S. sanctions imposed on Turkey," she added.

The United States has a significant military interest in Turkey in its key base at Incirlik, a military airport located in southern Turkey used as a hub for operations against the Islamic State jihadist group in Syria.

The base also houses a stockpile of dozens of American tactical nuclear weapons.

Muharrem Ince, who was the main opposition candidate in Turkey's presidential election in June, had threatened to shut down the key American base by Christmas unless the U.S. extradited Gulen.

Ince went on to lose the election to Erdogan by a large margin, but the U.S. military site remains a potential pawn in the growing diplomatic row between Ankara and Washington.