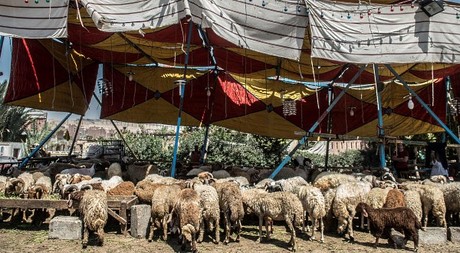 Faced with scenes of blood flowing in rubbish-strewn roads and of streets littered with animal entrails, authorities in the Egyptian capital say they aim to crack down on the outdoor slaughter that marks one of Islam's main holidays.

Eid al-Adha, or the festival of sacrifice, is marked by Muslims sacrificing animals according to religious traditions at the end of the hajj annual pilgrimage to Mecca and Medina.

Ahead of the holiday, which this year starts on Tuesday, temporary sheep markets have sprung up amid the exhaust fumes and garbage heaps of the sprawling metropolis.

But the governor's office in Cairo insists it is on a "cleanliness" drive to stop the widespread slaughter of animals in the distinctly unhygienic surroundings of the city's streets.

To prevent the "barbaric and unacceptable" spectacle, officials in each neighbourhood have been ordered to "strictly" enforce laws prohibiting the practice, city spokesman Khaled Mostafa told AFP.

Offenders risk a fine of at least 5,000 Egyptian pounds ($280, 250 euros), a hefty sum that exceeds the average monthly wage in the country.

- 'Dirty and dangerous' -In the crowded Sayeda Zainab neighbourhood near central Cairo, local merchants keep the sheep up for sale for the feast down muddy alleyways.

Traders like Hussein Abul al-Aziz say they welcome the push to eliminate the killings in the streets and claim they don't engage in the practice.

"It is unacceptable to slaughter in the street, it must be done in an abattoir with a veterinarian who examines the animal and under the supervision of the health ministry," Aziz said, standing among his well-fed beasts.

But it  clear that the message from the authorities has not reached most people.

Local resident Ahmed Ragab shops around for a sheep for Eid al-Adha.

The father in his fifties confides that he has not heard of the official sanitation drive and was planning to slaughter his animal in the street outside his house.

"But it is true that it's dirty and dangerous," he concedes.

- Religious edict -It is not just Cairo officials who are seeking to dissuade people from street sacrifices.

Egypt's state-sponsored Islamic religious authorities, which rule on sharia law, have also come out against the practice.

The Dar al-Ifta institution published a speech this month condemning street sacrifices as a "great sin and serious crime".

A potential cause of diseases and epidemics, leaving behind the remains of the animal is also considered "impure" by the Koran holy book, the government body said on its website.

The United Nations Food and Agriculture Organization recommends strict guidelines for the slaughter of animals.

It says abattoirs should be "situated away from residential areas" and calls for "a well-planned, well-executed and controlled cleaning and sanitation programme".

However, the aspirations of the authorities and advice of experts seem at odds with the reality in the marketplace.

On the outskirts of Cairo, makeshift pens hold sheep close to an open sewerage drain.

Local butchers complain of financial woes they face as the cost of living soars in Egypt.

Most did not want to answer questions but it was clear they would meet customers' demands -- including butchering animals in the streets -- to make ends meet.

"We'll do anything," one told AFP.