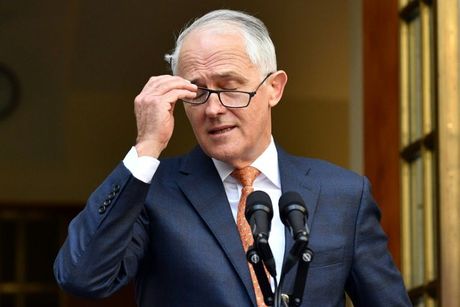 A prime minister failing to see out his full term should be a rarity, but in Australia it's become the norm, with a culture of parliamentary back-stabbing that has driven disaffected voters into the arms of fringe parties.

With Malcolm Turnbull the latest to be knifed by his party, no leader has managed to see out their full three years since long-serving John Howard was defeated in the 2007 election.

When Scott Morrison takes the oath for the top job after having emerged victorious from the Liberal Party bearpit, he will become Australia's seventh prime minister in 11 years.

The extraordinary scenes in the nation's capital have been met with renewed disgust towards the political class -- already rated among the least trusted people in the country, despite an era of relative prosperity and economic growth.

"Hang your heads in shame," the tabloid Northern Territory News screamed on its front page Friday.

Australians, it said "have had enough of politicians putting their own self-interest ahead of the people they are elected to represent".

Former opposition leader John Hewson, now an analyst at the Australian National University, said the turmoil was indicative of a new breed of unprincipled politicians, coupled with a voracious media cycle that appeals to their worst instincts.

"They put personal benefits and career ahead of the national interest," he told AFP.

"They're more interested in the game of politics rather than good governance. Some of them are still playing university politics and they don't see that they have a responsibility."

While broken promises have long been part of the political landscape, a descent into all-out public brawling appears to be the new normal in Australia.

Julia Gillard, a former Labor prime minister who was herself unceremoniously unseated in a party coup, said the trend was evident globally as hardliners wrestle to move centre-right parties further to the right.

"On the conservative side of politics right around the world, we're clearly seeing a fracturing of small 'l' liberal tendencies and those who are more conservative and much more nation-centred," she told The Guardian this week.

"They want globalisation to stop."

The disarray has stoked a political realignment in Australia, with a hodgepodge of independents and smaller parties, like the anti-immigration One Nation, stepping into the void to mop up disaffected voters.

They now hold the balance of power in parliament, forcing the ruling conservative coalition to make concessions in order to get laws passed, undermining the government's policy agenda.

- 'A disgrace' -As Turnbull's enemies huddled to unseat him on Thursday, fuming Greens Party leader Richard di Natale stood up in parliament to condemn the backroom dealing as a disgrace.

"We have people across the country who are suffering and look at what you're doing," he said, listing national woes including the worst drought in half a century that has forced some farmers to shoot their livestock.

"You are so focused on yourselves that you've forgotten what the country elected you to do. And that is to govern for them, not you."

His scathing speech was echoed on social media, where Australians vented their frustration at the latest antics.

The dysfunction began when Turnbull was turfed out as leader of the then-opposition Liberal Party by his chief nemesis, arch conservative Tony Abbott in late 2009.

Abbott then lost the 2010 national election to Labor's Gillard, who had toppled her own leader Kevin Rudd in a ruthless takeover just weeks earlier.

Gillard was similarly kicked out by Rudd ahead of a 2013 election, meaning that in a dizzying turn of events the prime ministership went from Rudd in 2010 to Gillard and back to Rudd ahead of the 2013 poll won by Abbott.

Fast-forward to 2015 and Turnbull got his revenge by dramatically forcing Abbott from office in a Liberal Party coup, claiming the government faced defeat at the next election without change at the top.

Turnbull went on to win 2016 national polls, but Abbott didn't go quietly and has been a frequent critic from the backbench. He is widely seen as one of instigators in this week's latest sorry chapter in Australian politics.