'Don't Play with Fire', Nasrallah Tells Those 'Betting on STL' 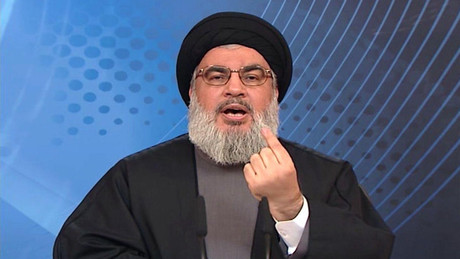 Hizbullah chief Sayyed Hassan Nasrallah on Sunday warned parties allegedly “betting on the Special Tribunal for Lebanon” against “playing with fire,” as he called for postponing the thorny debate on Lebanon's ties with Syria until after the formation of the new government.

“Some March 14 circles are saying that the main reason behind delaying the formation of the government is that the Special Tribunal for Lebanon will issue its ruling in September and that there will be a new situation in the country to capitalize on,” Nasrallah said in a televised address marking the ouster of jihadist groups from the outskirts of several eastern border towns.

“The STL does not mean anything to us at all and its rulings are of no value regardless whether they are condemnation or acquittal rulings,” he added.

“To those betting on the tribunal: do not play with fire. Period,” Nasrallah warned.

The STL Trial Chamber has scheduled oral closing arguments in the Rafik Hariri assassination case for the period between Sep. 11 and Sep. 21. Four Hizbullah operatives are being tried in absentia over their alleged role in the killing.

The STL Prosecution has recently submitted a “Final Trial Brief” that explains the links between Hizbullah and the supposed assassination squads and draws attention to meetings and phone calls between senior Hizbullah and Syrian officials prior to the February 2005 attack.

“We are still betting on internal dialogue regarding government formation but time is running out and quick efforts must be exerted to address the situation,” Nasrallah cautioned.

“Let us postpone the debate over the relation with Syria and the ministerial policy statement until after the formation of the government,” he urged.

Nasrallah also noted that “claims that Hizbullah is now in control of Lebanon's decisions are aimed at pinning the blame on the party for all the current situations,” while pointing out that “the relation between Hizbullah and President (Michel) Aoun is a relation of trust.”

“No one of us imposes his policies and orientation on the other,” Nasrallah added.

I can only hope for his sake that he doesn't force Israel to prove how wrong he is.

So Israel, America, Saudi Arabia, the UAE etc are all attacking your rag head iranian terrorists in Yemen and they are still standing? You are a cheap delusional propagandist; a sorry excuse of a human being.

Do you still tear up like I do every time you remember sayidna al hussain? Do you?

I cannot wait to spend blessed Ashoura with you in Nabatieh this year so we can bond and do group heart felt Latmiyat.

I hope you mean for the Lebanese sake Philip as the majority of the Lebanese would not be too upset with seeing the bearded goat get some justice. That said though he getting into his broken record of stating he does not give two hoots about the STL. Why does he keep mentioning this?...if he does not care?

@Mystik
A lot of loser words from you, stay quite and accept your defeat little irani. Live with it, or die with it. Or continue to cry in dahieh about it.

Israel is not, and never has been, an enemy of the Republic of Lebanon, or of the peace-loving Lebanese people. The only enemy Israel has on Lebanese sovereign territory is the Hizballah terrorist organisation who through its leader Nasrallah dreams on a daily basis to destroy Israel, but who has been stuck like a coward for over 10 years in his underground bunker.

The only enemy of Lebanon is you, your cult, and your criminal iranian ideology. Brag as much as you want; bragging never won a war. Dahieh will be flattened and I will be watching and rejoicing.

"patriotic
..... the last two wars, were the proof."
Proof of what? Proof that not a single Hizballah fighter succeeded in even crossing the border into Israel during both wars.

you are an Iranian immigrant yourself.

Nasrallah also noted that “claims that Hizbullah is now in control of Lebanon's decisions are aimed at pinning the blame on the party for all the current situations,”

then the iranian says : "'Don't Play with Fire'

Nasrallah: This victory (over jihadists in the eastern border region) was made by the army-people-resistance golden equation.

Nah Hassan sweetheart, the victory was the Lebanese army's alone with the support of Lebanese the people. The so called resistance was the one that conspired on both, with the Syrian government, got the jihadists a golden get-away ticket on air conditioned buses and then got real pissed at the Americans attacked the buses.

Nasrallah: We've been fighting for seven years now and our environment has not shown any weariness but rather further embracement and support.

he and his followers are filth.

13 hours ago Nasrallah: The STL does not mean anything at all to us

Not only the STL 'does not mean anything to you' but all of Lebanon, its people, and its constitution.

This guy talks too much

Its only speech number 118 for the year Hakwaji lol and a memorable one too lol.He averages around 13 speeches per month so hes on track for meeting his yearly quota of 156 Speeches per annum. The word on the street is that this time around if he hits the 160 speech target Israel will disintegrate lol.