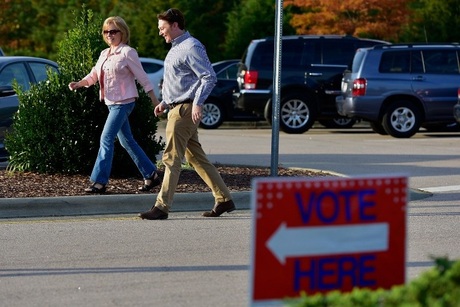 Women and well-off suburban Republicans will play decisive roles in countering Donald Trump's loyalists in November's midterm elections, according to Ipsos pollsters who are armed with new tools to face their first big test after the billionaire's shock 2016 victory.

Trump's capture of the White House took the entire polling industry by surprise, as election forecasters blew it by predicting a Hillary Clinton win.

This year in order to obtain a more comprehensive view of a complex electorate, Ipsos is using an amalgam of three sources of information -- traditional polls, expert analysis from the University of Virginia, and social media trends -- in a new tool, available for free online and presented Tuesday in Washington.

"It's really come out of our experience with the 2016 elections ... The market writ large got the elections wrong," Cliff Young, president of Ipsos Public Affairs, told AFP in an interview.

There has been extensive debate over why so many polling organizations missed the mark two years ago, but in Ipsos's view it was because "the market, in general, depended on one single input and that was polls," Young said.

Ipsos will be tracking more than 400 races scheduled for November 6, using its new tool to poll 10,000 likely voters per week, analyze the assessments of a dozen political science professors, and screen up to 5.5 million social media mentions per day.

At stake in November are the 435 House of Representatives seats and about one-third (35 seats) of the 100-member Senate, both of which are currently controlled by Republicans. The governorships in 36 states, as well as numerous state and local seats, are up for grabs.

Most signs point towards Democrats taking back the House, although it will be an uphill climb for them to do the same in the Senate, where the electoral map is tougher.

"All three of the methods suggest it will be a strong blue year," Young said. "The question is how big will the wave be?"

Another question is what to make of the president's prediction of a "red wave" instead.

"That's fantastical," Young said, emphasizing that the party in power in the White House typically sheds seats in Congress in the midterms.

Three demographic groups are likely to play pivotal roles, according to Young.

Women, who might be put off by the scandal-plagued Trump, "will be very important" in determining 2018 election outcomes, he said. "There is a huge differential in terms of support for women between Trump and the Democrats."

"These tend to be Republican strongholds" where voters favor lower taxes and pro-business policies, but who have become "very turned off by the conduct of the president" and might sit out the November election, Young said.

Finally, Trump's core supporters: ignoring them would be a mistake. The president enjoys a high rate of popularity, some 80 percent, among Republicans.

Minority voters, who lean Democratic, tend to mobilize less during midterm elections. "But who knows this year?" Young said, noting that traditional political patterns have been jolted since Trump's White House win.

On the social media front, Ipsos -- through the use of complex algorithms -- is analyzing trends in online conversations that provide "very good insight" into understanding the key issues for voters in 2018, Young says.

Three topics, apart from the overarching figure of Trump himself, are at the fore: health care, immigration and jobs.

Keenly aware of the Russian interference in the last U.S. presidential election, including the spread of fake or inflammatory news reports on social media, Ipsos is taking care to detect and dismiss the "bots," or automated accounts, some from overseas, that have proliferated in the political realm.

"What we really want to understand is what is the true human conversation going on," Young said.