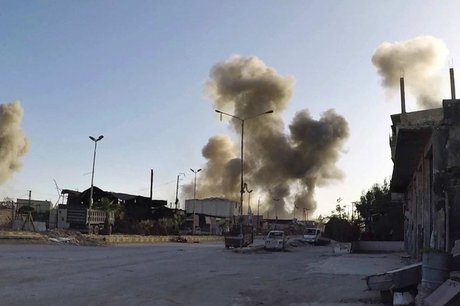 An air strike near a US base in southeastern Syria has killed at least eight pro-government fighters, the Syrian Observatory for Human Rights reported Monday.

Four Syrians, one Iranian national and three other non-Syrian fighters were among the casualties of the strike carried out on Saturday, the war monitor said.

"A convoy of Iranian forces and allied militia was hit by air strikes as it drove near Al-Tanf base," the head of the monitoring group Rami Abdel Rahman said.

He said he could not confirm the strike had been conducted by the US-led coalition present in the region.

The coalition did not immediately reply to an AFP query.

Several strikes against Syrian government or allied forces have been in the past attributed to US forces deployed as part of a multinational coalition against the Islamic State (IS) group.

The base, set up in 2016 near the borders with Iraq and jordan, was also used for the training of so-called "vetted opposition" to the regime of President Bashar al-Assad.

Despite a 55-kilometre (34-mile) deconfliction zone around the base, Al-Tanf is seen as a potential flashpoint between US and Iranian or Tehran-backed forces.

The presence of a US base in the arid border region has been a source of tension and its dismantling is often cited as a key demand by Damascus and its allies.

Beyond the battle against IS jihadists in their nearby desert hideouts, analysts say Washington sees the base as disrupting Iranian efforts to open a east-west land corridor from Tehran to Lebanon.

Great start to the week!