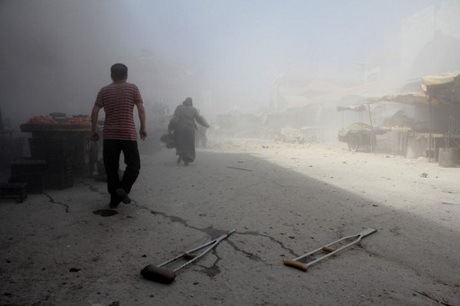 The U.N. urged Russia and Turkey Tuesday to help avert a "bloodbath" in Idlib, as renewed Russian airstrikes on the Syria's last major rebel stronghold killed least nine civilians, according to a monitor.

Rebel-backer Turkey has held several rounds of talks with regime ally Russia aimed at averting an major assault on Idlib, but Moscow on Tuesday dubbed the province a "pocket of terrorism" as Syrian troops massed near the region.

A full-fledged assault would be devastating for the nearly three million people living in the northwestern province, many of them rebels and civilians who were bussed out of other areas as they came back under regime control.

The U.N.'s Syria peace envoy Staffan de Mistura on Tuesday called on Russian President Vladimir Putin and his Turkish counterpart Recep Tayyip Erdogan to urgently speak on the phone even before they are set to meet with their Iranian counterpart in Tehran on Friday.

De Mistura pointed to press reports indicating that Syria has set a September 10 deadline for finding a solution before it begins an all-out offensive on the province.

"Let's try to avoid that the last probably major battle of the Syrian territorial conflict... ends in a bloodbath," he told reporters in Geneva, insisting Russia and Turkey held "the key for the soft solution to the Idlib issue."

His appeal came after Russian warplanes resumed air strikes on Idlib after a 22-day pause.

The Britain-based Syrian Observatory for Human Rights, which relies on sources in Syria for its reports, said at least nine civilians, including five children from the same family, were killed in the raids, while 10 people were wounded.

U.S. President Donald Trump late Monday joined a growing chorus of voices warning the government of Syrian President Bashar al-Assad against a full scale assault, which he said could trigger a "human tragedy."

Seized from government forces in 2015, Idlib and adjacent areas form the last major chunk of territory still in rebel hands.

Tuesday's bombardment hit several areas held by the jihadist-led Hayat Tahrir al-Sham alliance, among them the large town of Jisr al-Shughur, but also areas held by rival Turkish-backed rebels, including the town of Ariha.

The Syrian military has been deploying reinforcements to the zone for more than a month, and Russia has stepped up its rhetoric.

"We know that the Syrian armed forces are getting ready to solve this problem," Putin's spokesman Dmitry Peskov said on Tuesday, calling Idlib a "pocket of terrorism."

Moscow has been carrying out strikes in Syria since September 2015, using aircraft based at the Hmeimim base in Latakia province.

It accuses rebels in Idlib of attacking Hmeimim with weaponized drones and insists jihadists in the province must be eliminated.

De Mistura said there were an estimated 10,000 fighters with U.N.-recognized terrorist organizations currently in Idlib.

But he stressed that there are some 2.9 million civilians in the province, including around one million children, who "are not terrorists".

Jan Egeland, head of the U.N.'s humanitarian taskforce for Syria, meanwhile stressed to reporters in Geneva that "there are many more babies than terrorists in Idlib."

"We appeal for sanity."

Amid a diplomatic frenzy to try to avoid a full-scale assault on Idlib French Foreign Minister Jean-Yves Le Drian told AFP Tuesday "it is important today that the path to negotiations be open and not that towards confrontation."

De Mistura, whose years of efforts to push forward a Syrian peace deal have achieved no breakthroughs, insisted Tuesday that he would push ahead with his efforts to set up a committee to write a new Syrian constitution.

He said he did not plan to postpone two rounds of consultations next week with high-level representatives of a range of countries with influence on different sides in the conflict.

"It is going to be a moment of truth," he said.

The lives of Syrian civilians do not count is what Kizballah and Iran are saying in support of Bashar. Bashar is also saying he would be quite happy being a dictator if it meant that more than half the population of his country is destroyed. Having a country with a Shi3a and Alawi population is fine with him and also is good for Israel too. Zmick is simply saying that he likes that idea too.

Yet the majority of Syrians in Assad areas are Sunni.