U.S. Envoy for Syria in Turkey for Talks 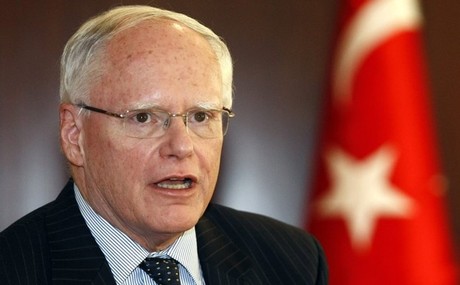 The U.S. envoy for Syria was in Ankara on Tuesday to discuss the latest developments in the war-torn country with Turkish officials as an offensive against rebel-held Idlib appeared imminent.

Turkish Defense Minister Hulusi Akar discussed the Syrian war with James Jeffrey, the U.S. special representative for Syria engagement, the Turkish defense ministry said in a statement, but gave no further details about the content of the meeting.

The two men also discussed Kurdish militants in the region, the ministry added.

Akar and Jeffrey met as Russian warplanes battered Syria's rebel-controlled Idlib for the first time in three weeks as expectations grow over a regime offensive.

Turkish Foreign Minister Mevlut Cavusoglu had said on Monday that the two would discuss Idlib.

Ankara has kept a close eye on the possibility of the Idlib offensive.

Cavusoglu warned Russia last month that seeking a military solution in Idlib would cause a "catastrophe" and trigger a new flow of refugees across Turkey's borders.

The presidents of Turkey, Russia and Iran are due to meet in Tehran on Friday for a tripartite summit likely to focus on Idlib.

Although Ankara has repeatedly called for Syrian President Bashar al-Assad to be ousted, Turkey has been working closely with regime allies Russia and Iran to end the conflict.

Meanwhile, Turkish and Russian officials have held several rounds of talks hoping to avert an assault on Idlib.

Jeffrey's visit comes after a bitter spat last month between Ankara and Washington over the detention of an American pastor.

But relations have also been strained over U.S. support for a Kurdish militia in Syria viewed as terrorists by Turkey.

The defense ministry said that, in their meeting, Akar and Jeffrey also discussed Ankara's "discomfort" with the presence of the Kurdish Democratic Union Party (PYD) and its People's Protection Units (YPG) militia.

Ankara says the PYD and YPG are "terrorist" offshoots of the outlawed Kurdistan Workers' Party (PKK) which has waged an insurgency inside Turkey since 1984.

The PKK is blacklisted as a terror group by Ankara, the U.S. and the European Union.

"It was stated that it was necessary for the separatist terrorist organization to leave the region completely," the defense ministry said, referring to the PKK.

The trip to Ankara is the first by Jeffrey, a former U.S. ambassador to Turkey, and comes after he visited Jordan and Israel at the weekend, where he met Israeli Prime Minister Benjamin Netanyahu.