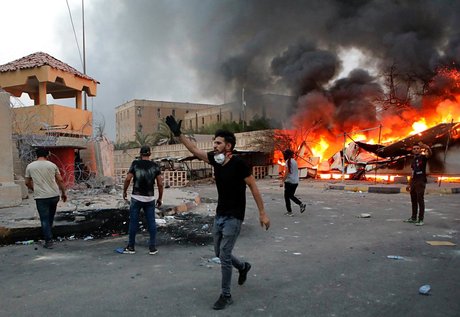 The United Nations envoy to Iraq called Wednesday for "calm" in Basra, after six died in the bloodiest day of protests over poor public services in the southern city.

In a statement, Jan Kubis, the U.N.'s special representative in Iraq, called on "the authorities to avoid using disproportionate, lethal force against the demonstrators."

He also urged authorities to "investigate and hold accountable those responsible for the outbreak of violence."

Many shops were closed, while burned tires lay strewn across the city's streets, an AFP correspondent said.

The city -- along with the province of the same name -- has been hit by protests since early July against poor public services.

Residents are angry over pollution of the local water supply, which has put 20,000 people in hospital.

Kubis in his statement called on the government "to do its utmost to respond to the people's rightful demands of clean water and electricity supplies as a matter of urgency."

The authorities said they would take measures to put an end to the health crisis that has ravaged the oil-rich province.

The local governorate's headquarters, the main rallying point for protestors, bore the traces of damage from molotov cocktails and fireworks thrown late into the night.

"Six demonstrators were killed and more than 20 wounded" in front of the government building on Tuesday evening, said Mehdi al-Tamimi, head of the government's human rights council in Basra province.

Tamimi accused the security forces of "opening fire directly on the protestors."

In his weekly press conference in Baghdad on Tuesday, Iraqi Prime Minister Haider al-Abadi said he had ordered "no real bullets ... to be fired, in the direction of protesters or in the air."

Shiite leader Moqtada Sadr said in a tweet that "vandals infiltrated" the protestors.

Sadr's political bloc won the largest number of seats in national elections held in May, and he is trying to form a new government with Abadi.

Abadi announced in the night that he had met lawmakers from Basra, who are in Baghdad for the parliament's first session since the elections.

He again indicated that water pollution would be addressed, without specifying any measures.

In July, the government announced a multi-billion dollar (euro) emergency plan for southern Iraq, to revive infrastructure and services.

But protestors are wary of promises made by the outgoing government, as negotiations drag on over the formation of the next administration.