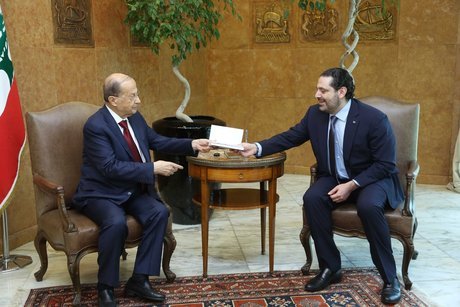 President Michel Aoun has reportedly made a number of reservations about a government formula presented by PM-designate Saad Hariri, mainly a suggestion to allocate the justice ministerial portfolio to the Lebanese Forces Movement, al-Akhbar daily reported Thursday.

The daily said that Aoun, founder of the Free Patriotic Movement, insists on allocating said portfolio to an FPM figure, specifically to the current Justice Minister Salim Jreissati.

When Hariri explained that an agreement was reached on that point with Aoun’s son-in-law, Foreign Minister Jebran Bassil, the President stressed that naming a minister for justice and the deputy premier post were “up to him,” said al-Akhbar.

The newspaper also said that Aoun was determined to name a Sunni minister as part of his share in the new government.

The whole seats allocated to the LF could be “reconsidered” said the daily, because Aoun also had reservations about a failure to give the LF a state ministry, just as Hariri’s formula has given the other government components, it said.

Another contentious point is the Druze share. Aoun did not agree on giving Walid Jumblat’s Progressive Socialist Party the whole three seats. He believes “this exclusivity is a prelude to raising a charter problem in the future cabinet.”

A cabinet line-up, supposed to be confidential surfaced in media outlets, was presented by Hariri to Aoun on Tuesday.

The LF had insisted on getting five ministerial seats including a so-called sovereign portfolio.

Other portfolios were reportedly distributed as follows:

- Hizbullah: Health, State Minister and a yet to be allocated portfolio

- AMAL Movement: Finance and two other portfolios that are yet to be allocated

- Progressive Socialist Party: Social Affairs, State Minister and a yet to be allocated portfolio

1- " the President stressed that naming a minister for justice and the deputy premier post were “up to him"
2- " to name a Sunni minister as part of his share"
3- " Marada Movement the Public Works and Transportation ministry, which Aoun refused"
4- "Aoun did not agree on giving Walid Jumblat’s Progressive"
5- "seats allocated to the LF could be “reconsidered”"

It does NOT look he agrees on anything or anybody??
One day talk to Bezzil then the next day it is "up to him"

*****Where do we go from here now that all other children are growin' up. And how do ... I don't wanna live here no more, I don't wanna stay.----by Alan.Parsons

It reminds me about the musical chairs game...

I have the utmost respect and deepest admiration for PM Saado Hariri for electing general aoun who is now president and imam.

Aoun wants to be President and Prime Minister.... just like his master Bashar al Assad.