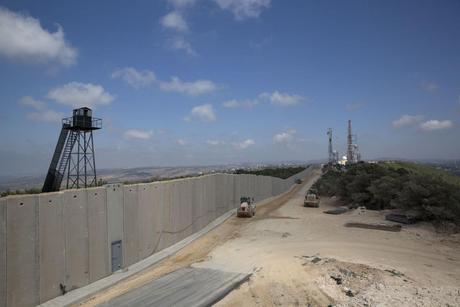 Israel is building a massive wall along its northern border, saying the barrier is needed to protect civilians from Hizbullah attacks, but the project has raised tensions with Lebanon, which fears the fence will encroach on its territory.

The Israeli military insists the entire barrier is being constructed in Israeli territory, and the U.N. peacekeeping force in the area agrees. But Hizbullah has never fully accepted the border, and a senior Israeli military official stressed the need for the wall, saying that while Israeli intelligence closely monitors the group, "we are prepared for the possibility that they will surprise us."

The official spoke on condition of anonymity under military guidelines during a military-led tour of the border region provided for reporters.

Israel's military conducted a large-scale combined arms drill in northern Israel this week simulating a future conflict with Hizbullah, with which it fought a monthlong war in 2006. Israelis fear there could be a renewal of hostilities as the civil war winds down in neighboring Syria, where the Iran-backed group has been fighting alongside President Bashar Assad's forces for the last seven years.

Hizbullah, which is considered a terrorist group by the U.S. and Israel, is believed to have an even larger and more sophisticated arsenal of rockets than in 2006, when it fought Israel's vaunted military to a stalemate in southern Lebanon. That war began with a deadly cross-border raid in which Hizbullah killed eight Israeli soldiers and abducted two others, whose remains were returned to Israel in a prisoner exchange two years later.

Brig. Gen. Eran Ofir, the commander in charge of Israel's border wall projects, said around seven miles of the 80-mile (130-kilometer) barrier has been built. The $450 million project is slated for completion in two years. Most of the barrier is a concrete wall topped by steel mesh, sensors and surveillance cameras. Steel fencing replaces the concrete wall in especially rugged areas.

Earthmovers and other large machinery rumbled alongside a completed section of the 30-foot (9-meter) high concrete wall earlier this week near the Mediterranean coast. Lebanese soldiers looked over the barrier from a guard post on the opposite side of the Blue Line, which was demarcated by the U.N. after Israeli forces withdrew from south Lebanon in 2000 following an 18-year military occupation. The two countries technically remain at war.

The U.N. Security Council warned last month that violations of the cease-fire agreement between Lebanon and Israel could lead to fresh conflict, and Lebanon's top security body earlier this year described the planned border wall as an "aggression" against its sovereignty.

"This wall, if it is built, will be considered an aggression against Lebanon," it said in a statement. "The Higher Defense Council has given instructions to confront this aggression to prevent Israel from building this so-called wall barrier on Lebanese territory," it added.

Maj. Tomer Gilad, Israel's liaison officer with UNIFIL, said there are monthly meetings with the Lebanese military and U.N. officials to coordinate the barrier's construction.

"Even for the past year before we started this construction, we've coordinated this activity with UNIFIL, and through UNIFIL with the Lebanese Armed Forces. We've alerted them of our intention to do so, to construct this defensive mechanism," Gilad told reporters.

UNIFIL spokesman Andrea Tenenti said that since construction began in February 2018, everything has been built south of the Blue Line and away from sensitive areas.

Israel says the barrier's purpose is to defend Israeli communities from Hizbullah, pointing to sporadic cross-border attacks on Israeli troops and civilians in recent years. The volatile border between the two countries has been relatively quiet since the 2006 war, with few major cross-border attacks or incidents.

Israel warplanes, however, regularly violate Lebanese airspace, including to carry out airstrikes in neighboring Syria.

In 2010, an Israeli army officer was killed and another was seriously wounded when Israeli troops came under fire by Lebanese army forces while trimming trees on the Israeli side of the border. Three Lebanese soldiers and a Lebanese journalist were killed in Israeli retaliatory shelling. In 2013, an Israeli soldier was killed by a Lebanese army sniper while driving along the border, and in 2015 Hizbullah fired an anti-tank missile at an Israeli military convoy, killing two soldiers and wounding seven.

The Israeli official who spoke on condition of anonymity said the army has noticed a troubling rise in "very close cooperation between Lebanese Army Forces and Hizbullah" near the Israeli frontier in the past year. He says the military expects even more Hizbullah fighters to arrive in the area after the Syrian war ends.

The Israeli official who spoke on condition of anonymity said the army has noticed a troubling rise in "very close cooperation between Lebanese Army Forces and Hizbullah" near the Israeli frontier in the past year.

That is what aoun and his army commander have done.

They will pay for it dearly in the next and final war. Baabda will be leveled just like dahieh.

a zealous iranian should not be talking about Lebanese interests.

Ever since Imam Al Mahdi came to me and entrusted me with being the 12th twelver, my whole life has changed and I have become a new person. I wear yellow headbands all the time even when I play golf, I have on demand tears, and I can never count beyond twelve! I do Latmiyat daily before any office meetings and prior to boarding a plane.

I cannot wait to celebrate Ashoura this year with you in Nabatieh and convince you to become the 13th twelver. I already bought matching black outfits for us, a few sharp knives, and a couple of stainless steel chains.

"A lot of loser words from you, stay quite and accept your defeat little irani. Live with it, or die with it. Or continue to cry in dahieh about it."

half huthi half irani troll spotted
logged tagged and processed

As long as the U.N. Peacekeeping force agrees that the wall is being built on Israeli territory and does not encroach on Lebanese territory, who the hell cares what Hizballah thinks or says

Thank you southern for being patriotic and for posting under the patriotic alias; one of several hundred aliases that you have.

I could not but agree with you against the Israeli phillipo from across the border. It is obvious that he and his 'terrorist apartheid state' fear the resistance. I was at Barbar yesterday having a shawarma sandwich with my university class mates and to prove your point I did mention to them that Israel is so scared of the resistance that it admitted to carrying out more than 200 strikes against them and their iranian allies in Syria in the last 18 months alone.

Your relentless approach in seeking the truth and your mastery of using psychological warfare against Lebanon and Iran's enemies are to be recognized and commended.

All that I am, or hope to be, I owe to you dear southern.
To paraphrase Shakespeare, “We shall not see Your like Again.”

Not me, but every sane person in the world, realises that Hizballah is more of a threat to the Republic of Lebanon than it is to the State of Israel.
Apartheid state - Israel accepted and granted citizenship to the 800,000 Jewish refugees from Arab States (including Lebanon) since 1948, whilst Lebanon granted citizenship to exactly - NONE and still keep them and their descendents in camps.
And you have the audacity to call yourself "Patriotic". Certainly not to the Republic of Lebanon.

southern, you think your resistance will deal with the wall after liberating Syria, Iraq, Yemen, Bahrain?

"southern....aka patriotic 6 hours ago
if you resist, then you exit..... the Lebanese resistance."

Dear little Southern.... with a bit of Logic!
"stfu and stick to this saying.... the fish dies by the mouth!
if you don't understand, back to school in qom, it's for free for iranian immigrants like you."

What is Lebanese about you or your filthy iranian terrorist gang that you call 'resistance'? Is it their allegiance to the mullah's of Iran or their criminal non-accepting intolerant ideology?
Take your 'resistance' and go to Iran and enjoy 1 USD=Rials 150,000!