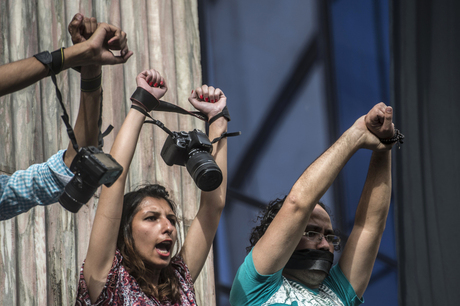 Shawkan was arrested in August 2013 as he covered deadly clashes in Cairo between security forces and supporters of ousted Islamist president Mohamed Morsi.

He was accused of "murder and membership of a terrorist organisation" -- charges that can carry the death penalty -- but should be able to walk free after already having spent five years in jail.

Shawkan should be able to leave prison "within a few days", his lawyer Karim Abdelrady said as he welcomed the verdict.

But the lawyer added that the sentence was nevertheless "unfair because he (Shawkan) was only doing his job" and covering the events unfolding in the Egyptian capital five years ago.

Shawkan's detention sparked outrage among human rights groups and NGOs who lobbied continuously for his release.

On Thursday, Amnesty International and press freedom group Reporters Without Borders (RSF) held a joint rally outside the Egyptian embassy in Paris to demand that he be set free.

At the time, Amnesty put out a statement warning Egyptian judicial authorities: "The world is watching you."

RSF ranks Egypt 161st out of 180 countries on its press freedom index and says that at least 31 journalists are currently detained in the Arab world's most populous nation.

Shawkan was one of more than 700 defendants on trial in the same case, most of them facing charges of killing police and vandalising property during the clashes.

The same court that jailed him also confirmed on Saturday death sentences initially issued in July against 75 defendants, including leaders of Morsi's outlawed Muslim Brotherhood.

Of the 75 defendants, 44 were in the dock while the rest were tried in absentia.

On August 14, 2013, one of the bloodiest days in Egypt's modern history, a month after the army ousted Morsi, police moved to disperse a sprawling Islamist protest camp at Rabaa al-Adawiya square in Cairo.

About 700 people were killed within hours at Rabaa al-Adawiya and Nahda Square where another sit-in was being held.

Hundreds more were killed in street clashes with police over the months that followed and mass arrests were made.

Amnesty and Human Rights Watch say at least 40,000 people were arrested in the first year after Morsi's ouster on July 3, 2013.

Egypt's courts have sentenced hundreds of them to death or lengthy jail terms after speedy mass trials, that the human rights group said made a mockery of due process.

They include Morsi and several leaders of his Brotherhood movement.