84 Dead in Fighting in Yemen's Hodeida after Talks Fail 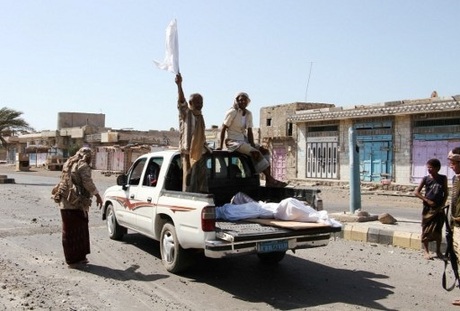 The sources in Hodeida province, controlled by Huthi rebels, said 11 soldiers and 73 insurgents had been killed since the talks were abandoned on Saturday.

Dozens of rebels and at least 17 soldiers had been wounded.

The pro-government coalition, which includes Saudi and UAE air forces, has been pushing to close in on Hodeida, the entry point for some 70 percent of Yemen's imports including food and aid, since June.

The coalition on Sunday was positioned to attempt to seize the main road linking Sanaa, the rebel-held capital, to the port city, a military official told AFP.

The road is a key supply route for the Huthis.

In July, the coalition announced a temporary ceasefire in Hodeida to give a chance to U.N.-brokered peace talks.

But U.N. attempts to hold peace talks between Yemen's Saudi-backed government and the Huthis, linked to Saudi Arabia's archrival Iran, were abandoned on Saturday, sparking fears of an escalation in the conflict.

The rebels refused to leave Yemen for Geneva, saying the U.N. had not met their demands -- including a plane to transport their wounded to nearby Oman and a guarantee their delegation would be allowed to return to Sanaa.

In 2014, the Huthis seized control of a string of Red Sea ports and the capital, driving the government out of Sanaa and the president into exile.

In 2015, Saudi Arabia and its allies intervened in the conflict to bolster President Abedrabbo Mansour Hadi, recognized by the U.N. as Yemen's president. They now control Yemen's airspace.

Nearly 10,000 people have since been killed and the country now stands at the brink of famine.