Bassil: Some Want to Encroach on Others Rights in New Govt. 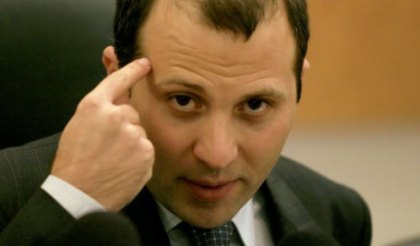 Free Patriotic Movement chief MP Jebran Bassil has lamented that “some parties want to exceed their rights in the government.”

“Those who exceed their rights would be encroaching on the rights of others,” Bassil warned.

And while noting that there are no efforts to “isolate anyone,” Bassil called for the formation of a national unity government containing neither victors nor losers.

“No one can impose an unfair format,” Bassil emphasized.

Bassil underlined that “the President has the right to lay out specific standards before signing on any Cabinet line-up,”

"the_roar: 4 hours ago
Ladies and Gentlemen: Today you just listened to the future president of Lebanon. Learn people, learn!"

Bassil has lamented that "some parties want to exceed their rights in the government.

Yup, for once Bassil's right! You see there's an old dude with an awesome combover in Baabda, who, along with his son in law, are insisting he has a God given right to a share in the government. And I remember clearly, once upon a time not so long ago an old dude, with a similar awesome combover and who looked suspiciously like that same old Baabda dude with the awesome combover, who kept insisting, to anyone who bothered to listen, that there is no such right or such a share and that such a share in the government is unconstitutional and should never be allowed at all.
'