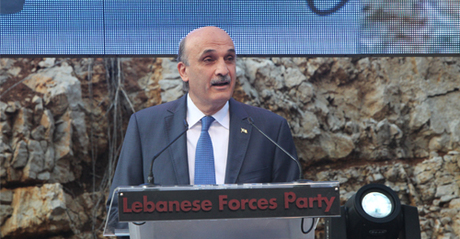 Lebanese Forces leader Samir Geagea on Sunday called on President Michel Aoun to “rescue his presidential tenure” through “reining in the greed” of some officials regarding the new government.

“I call on President Aoun to take the initiative of rescuing his presidential tenure with his own hands, starting by the formation of the new government. We are only asking him to rein in the greed of some parties and to rescue the grand presidential settlement which is truly threatened at the moment,” Geagea said in a speech during the LF's annual “martyrs mass” in Maarab.

“We are very concerned with consolidating the 'strong president' concept, which is very necessary for national balance, and to be able to do so we want the president to be successful and to be a president of managing solutions rather than crises... We are among the main backers of President Aoun, the Presidency and the presidential tenure,” the LF leader noted.

He however lamented that “some are undermining the presidential tenure's grand national policies for the sake of their petty personal interests.”

“Some are trying to curtail the representation of the LF and other parties and are trying to seize control of the biggest number of ministries in an illogical manner which no one can accept. This is all being practiced under the excuse of the 'president's share'. Such practices are what would undermine and obstruct the presidential tenure,” the LF leader added.

And stressing that no “foreign factors” are delaying the formation of the new government, Geagea blamed the deadlock on “obstruction” by some parties “who should be the most keen on the presidential tenure's success,” in an apparent reference to the Free Patriotic Movement and its leader MP Jebran Bassil.

The LF leader added: “We insist on full participation in the government in order to preserve the state and pull it out of the dilemma that some have plunged it in through their corruption, lack of planning and exploitation of the state's entire assets.”

“The elections proved that the LF is 'one third of the community' and this should definitely be reflected in the government,” he stressed.

Arent they all looool

Geagea is filled with hope, I wish I could share his positivity. I can’t wait for Aoun’s tenure to end, void is better than having a Syrian and Iranian puppet in Baabda.

One Third of the 'Christian' community even according to Bassil. In a government of 30 ministers, half shall be Christians, meaning 15 Christian ministers. One third of 15 equals Five LF ministers.

I have the utmost respect for Mrs. Awireless Constantine for its outstanding achievements in the fields of mathematics.

Whatever he says he means and does the opposite.

You are absolutely correct Tino dude! Par exemple, he said he was going to elect Aoun then he.. umm.. no wait.. Tino! Tino! Tino! What the hell's wrong with you Tino! .. I trusted you!!

They all talk and we see the results of it in the countries progress....