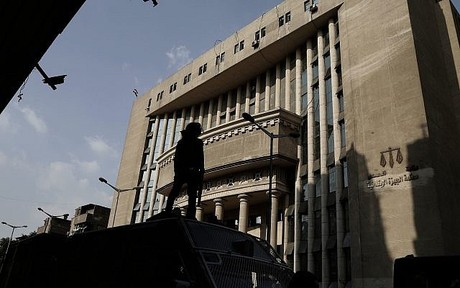 An Egyptian court has approved an appeal by a Lebanese woman who was sentenced to eight years in prison over insulting Egyptians in a video she posted online and handed her a suspended one-year sentence.

The Heliopolis Appeals court on Sunday fined Mona el-Mazbouh 10,700 Egyptian pounds (around $598) and ordered her deportation.

Egyptian authorities arrested el-Mazbouh in May after she posted a 10-minute video in which she used profanities to describe her vacation in Cairo where she says she was sexually harassed. She calls Egyptians the "dirtiest people" and Egypt "the country of pimps ... of beggars."

She was initially handed an 11-year prison sentence but it was later reduced to eight.

She should receive a hero's welcome back in Lebanon.

Sisi and Bashar are evil twins.... horrible dictators relying on foreign powers for their survival.

Who needs a tourist bureau or ads promoting "Vacation Destination Egypt".. I'm sure after this ruling tourists from all over the universe will be converging, en masse, towards Egypt like Hyksos Armies.. Thutmose III must be spinning in his sarcophagus.

Smart to post he dislike to the lovely and clean nation while she was there. What attracts people to going there in the first place???!!!

Same as going to Disneyland. To get your heart rate at 240 BPM.

Funny though Egypt is complaining against Saudi imprisoning an Egyptian expat worker who took selfies having breakfast with a Saudi Woman. The Egyptian press is saying that its his right to freedom of speech....the shoe is on the other foot.

I was in Egypt on a business trip back in 2012 and all I can say is never again, they are truly a different breed!