Aoun Says Not to Blame for Govt. Delay, Insists on 'Balanced Format' 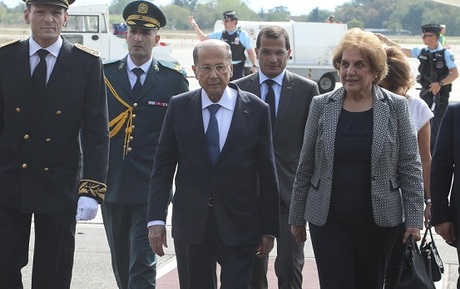 President Michel Aoun stressed Monday that the responsibility for the ongoing delay in the Cabinet formation process does not fall on the Presidency or his political party, insisting that any line-up should be “balanced” in order to receive his approval.

“We are not the obstructing party,” Aoun told reporters aboard a plane that carried him to Strasbourg where he will take part in a special session for the European Parliament.

“When the format becomes balanced, the government will be formed according to the standards and principles which I had announced in my speech on August 1 and which is accepted by all parties,” the president added.

“It is unacceptable for any group or sect to monopolize representation or marginalize a certain party,” Aoun emphasized.

Responding to a question, the president noted that “the issue of jurisdiction is being used to deviate attention from the main issue, which is the formation of the Cabinet.”

“The Constitution stipulates partnership between the Presidency and the Premiership in the formation process. Let them explain the meaning of this to us. There is no room for alternative explanations in the presence of the constitutional text,” Aoun underlined.

The president also revealed that the Syrian refugee file will top his agenda in Strasbourg and that he would tackle the U.S. decision to halt funding for the U.N. agency for Palestinian refugees, UNRWA.

“This issue might represent the beginning of naturalization, and this is categorically rejected by the Lebanese constitution and all Lebanese,” Aoun warned.

God protect the President and the First Lady; she is more elegant than Melania Trump.

Lui et elle n'ont pas été fort gâtés par la nature. Hence their frustration is manifesting against the beautiful people that we are by ruining our once heavenly country.

is someone wringing his neck?

you're right Justin:) Looking at the photo it sure looks like it.

is someone wringing his neck?

Nope, what you're seeing is one of the strings controls his movement. They're supposed to be invisible. I just realized he would be a great addition to Statler and Waldorf. I think they could fit a third seat on that balcony.

He is such a dwarf even the 7th dwarf Grumpy to his left looks taller than him!.
Lets hope he does not trip over a pencil again and it goes viral...

My 98 year old grandma was taller than him before she passed away.

Of course you're to blame. You insist on a share in the government you have no right to.

and daughters presidential advisors are tagging along......