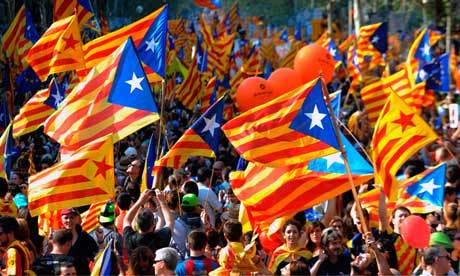 Catalan separatists will seek to put on a show of strength and unity at celebrations of the region's "national day" Tuesday, nearly a year after a failed attempt to break away from Spain.

At least 460,000 people have signed up for a Barcelona rally to push for a "Catalan Republic", organizers said.

Many more could join the march without signing up but that amount of people out on the streets would represent a marked fall from last year when a million marched for independence.

The demonstration starts at 5:14 pm (1514 GMT) on a regional holiday commemorating Barcelona's defeat by troops loyal to Spain's King Philip V on September 11, 1714, and the region's subsequent loss of autonomy.

Since 2012, the "Diada" holiday has been used to press for independence, to the dismay of those against breaking away from Spain.

"Today, more than half of Catalonia cannot celebrate anything," said Ines Arrimadas, head of the center-right, anti-independence Ciudadanos party in Catalonia.

This year's rally will serve to gauge the separatists' strength after an independence referendum last October 1, and the Catalan parliament's unilateral declaration of independence on October 27, all came to naught.

"Separatists will hit the streets to show they are the most organized political force" in Catalonia even though "there is no clear message", Oriol Bartomeus, a politics professor at the Autonomous University of Barcelona, told AFP.

Catalan president Quim Torra said the march will mark the start of a "mass mobilization." Further protests are planned for the anniversary of last year's banned referendum, which was marred by clashes between police and voters.

"Our government has committed to implementing the republic," Torra said in a televised speech Monday evening.

"This is a nation that feels and wants to be free."

Torra wants the central government in Madrid to allow a legally binding independence referendum for the region of 7.5 million people.

Separatist parties retained a majority, though slim, of seats in the regional assembly.

Rajoy's successor, socialist Pedro Sanchez, was catapulted to power in June with the support of separatist parties and has taken a softer line on Catalonia.

Sanchez has offered the region a referendum on greater autonomy, but this was rejected by Torra insisting the October 1 "mandate" for full independence be respected.

There are growing divisions in separatist ranks -- between those wanting to provoke a clash with Madrid, and those seeking a more conciliatory approach.

"If a separatist is so naive or stupid to believe he can impose independence on the 50 percent of Catalans who are not (separatists), it's clear that they are mistaken," Joan Tarda, a lawmaker for separatist party ERC in the Spanish parliament, said last week.

The ERC has a softer approach than its ally in the regional government -- former Catalan president Carles Puigdemont's Together for Catalonia.

Puigdemont was sacked by Madrid after last year's independence declaration, and fled to Belgium.

Separatist leaders in jail or exile over their role in the separatist push, issued a joint letter urging a mass  turnout Tuesday's rally and warning against "provocations from those who seek to divide us."

Thirteen Catalan leaders have been charged with rebellion, which carries a jail term of 25 years.

"The most important message that we must send is to demand the release of political prisoners," referring to jailed separatists, Alex Budoy, a 59-year-old nurse, told AFP Monday evening at a "freedom march" on the eve of the holiday.

Polls show voters have not changed their views much over the past year.

A closely-watched survey by the Catalan government's Centro d'Estudis d'Opinio in July showed 46.7 percent of Catalans want an independent state, just ahead of 44.9 percent who said they were opposed.