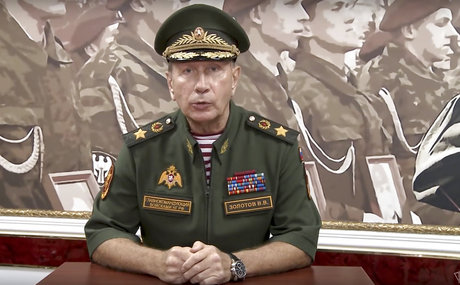 Russian President Vladimir Putin's close ally and chief of the National Guard on Tuesday challenged Kremlin critic Alexei Navalny to a "duel" and threatened to turn him into "steak."

Wearing his uniform, Viktor Zolotov spouted threats and insults in a video message to Navalny, who last month alleged corruption in the National Guard and is currently in jail for violating anti-protest legislation.

"You, Mr. Navalny, have never faced payback," Zolotov said, after rubbishing Navalny's corruption expose as slander. "Nobody have given you a quality kick in the ass. In a way you feel it in your liver."

"I simply call you to a duel, to the ring, to the tatami, to wherever. And I promise to make a juicy beefsteak out of you in just a few minutes," he said in the video posted on the National Guard's official website.

Navalny in late August published a video he addressed to the rank and file employees of the National Guard, the agency tasked with dispersing Russian protests.

Agency leadership, he tells the soldiers, "literally takes food out of your mouth for profit."

The expose alleges that the agency purchases poor quality food for its soldiers for overinflated prices.

Previously Navalny had alleged Zolotov himself -- a former head of Putin's security detail who was appointed to the current newly-created post in 2016 -- was "very rich" and that his family owned several luxury properties.

Zolotov in his video said that he was "not a poor man" but went on to accuse Navalny of being a "rotten" American agent.

"When you were still using the potty, I had served in the army, was an outstanding worker of Communist labor, worked in industry and then went into business," Zolotov said.

"And who are you, Navalny, I want to understand what you're made of," he said.

"It's clear you've been made in an American test tube... you are tasked with pouring mud over everything... to destabilize the country's political and economic situation," he said.

"You have no country, no Fatherland."

Zolotov added that "if you use offensive or slanderous language against me and members of my family, I promise you that before I step over you and wipe my feet on you, I will host a show for all employees of the Russian National Guard."

Perhaps Putin decided he needed a Trump mouth in his government, to match Trump's Trump mouth, while, however, Putin retained his freedom of action in light of circumstances and the demands of justice, as does Trump. Only rarely can a Shakespearean king be his own jester. It is when the rest of his court are knaves, varlets, courtesans.