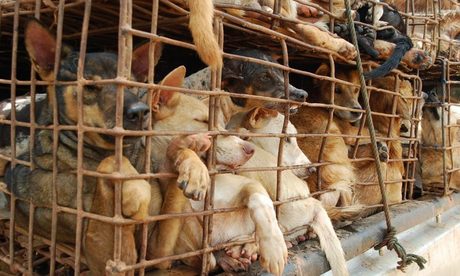 Roasted, boiled or steamed, dog meat can be found in markets and food shops across the capital city famed for its tasty street food, and the meat is traditionally eaten with rice wine or beer.

But Hanoi People's Committee on Tuesday warned residents to lay off canine meat to prevent the spread of rabies and other animal-borne diseases.

It also urged them to stop eating cat meat, often dubbed "little tiger" on Vietnamese menus, which is less popular than dog but still readily available in rural areas.

The practice of killing the animals is often cruel and the city government hopes it can be gradually phased out, it said in a statement.

It said it was a matter of preserving Hanoi's reputation as a "civilized and modern capital" among foreigners, many of whom consider eating the meat of animals commonly kept as pets taboo.

"The trading, killing and use of dog and cat meat has brought on a negative reaction from tourists and expatriates living in Hanoi," the statement said.

There are about 493,000 dogs and cats in the city, the vast majority of which are kept as domesticated pets, and about 1,000 shops open for selling the animal meat.

Three people have died from rabies in Hanoi since the beginning of this year, and two others were confirmed infected with the disease, according to official figures.

Vietnam's capital city is renowned globally for its street food, and its culinary staples such as pho noodle soup and pate banh mi sandwiches have reached menus around the world from Paris to Pittsburgh.