Politician of Lebanese Origin is Jailed Brazilian Leader's Plan B 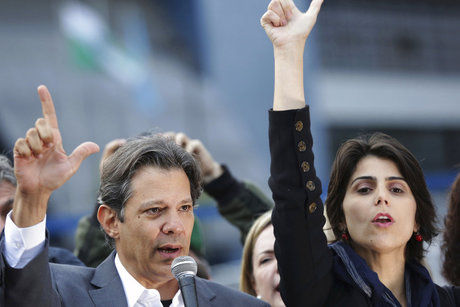 As he listened to the speech from the third row, Haddad drew little notice. After all, he wasn't singled out for praise or expressions of appreciation.

But on Tuesday, the 55-year-old former mayor of Sao Paulo was entrusted with the most delicate of missions: standing in for the jailed Lula in Brazil's October presidential elections.

Right on a court-ordered deadline, the sober-minded former education secretary appears to have been handed what many consider an impossible mission, replacing a candidate who is so popular that neither jail, nor scandal nor economic crisis dampened his frontrunner standing in the polls.

The same polls show that Haddad, a lawyer and former university professor, is no Lula. The latest survey by pollster Datafolha on Monday gave him just nine percent support, an improvement from a month ago.

He has barely four weeks to win over Brazilian voters.

He has come from behind before, however. The son of Lebanese emigrants who says he learned as much about life in his father's textile store as at university, wasn't the most high-profile candidate when he ran for mayor of Sao Paulo in 2012. But he ended up winning.

His tenure was marred by mass protests over transportation fare hikes in 2013, and in 2016 municipal elections, he suffered a humiliating defeat to liberal businessman Joao Doria.

The loss was a blow to Lula's Workers Party, coming just months after his successor, Dilma Rousseff, was removed as president amid a massive corruption scandal.

"I am not an anxious person. I wait for things to happen before taking decisions. I am a political person, in the sense of participating in public life since I was on a university faculty," Haddad told the newspaper El Pais in 2016.

Trained as a lawyer, with a master's degree in economics and a doctorate in philosophy, Haddad is married to a dentist with whom he has two children.

He served as Lula's education minister from 2005, leaving in 2012 under Rousseff to run for mayor of South America's largest city.

His political career put him at the center of the Workers Party, but without ever emerging from his mentor's shadow.

"Haddad spoke only when he was asked something," a former Lula ally told the Gazeta do Povo.

Some criticized him as too distant, which Haddad dismisses as unfair.

"I am the son of a Lebanese merchant and a school teacher. I learned at home to converse, to negotiate and in general I have a relaxed manner, even under the most adverse conditions. People confuse that with coldness and it's not," he was quoted as saying in a June 2017 article in the magazine Piaui.

But outside of Sao Paulo, few people have heard of the imperturbable Haddad.

His image hasn't been helped by accusations leveled last week by the Sao Paulo prosecutor's office of alleged corruption during his tenure as mayor, a charge he vehemently denies.

From this point on, Haddad's ability to hold on to Lula's base will be key if he and his expected runningmate, youthful communist Manuela d'Avila, are to reach the second round of Brazil's presidential elections.

It will be a sprint to beat the clock.

The Lebanese in him kicked in looool He gave a long speech and probably blamed all his enemies on his love of corruption. One cannot say our DNA is not strong!

Another leftist/socialist who happens to be wealthier than bankers.

This Haddad guy or Temer are crooks just like our crooks at home.

We already have a Fernando O quisling in Lebanon who is corrupt enough Batriotic. the difference is our quisling is on the other sides of the bars....

Seems every other corrupt South American politician is Lebanese these days. If only it had good effects for Lebanon, like the Zionist politicians in the US have.

wow, i cannot believe how smart that comment was!

Wow, I can't believe you finally made a comment that wasn't just an imitation of mine!

his a terrorist!!! we defends the islamization of Portugal....

his a terrorist!! defends the integration of meca refugies...