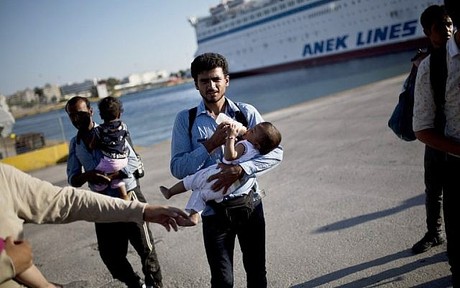 Surrounded by other people's belongings piled high on beds, Georgie Ndab wants to leave Tunisia's only migrant centre and take her baby to Europe.

"I spent eight months in prison in Libya. I want to go to Europe to guarantee my son a good education," said Ndab, a 21-year-old from Cameroon.

Sitting in a small room in suffocating heat, she pours talcum powder on baby Moses in an effort to relieve the eight-month-old's irritated skin.

"I thank Tunisia, but the situation here isn't good, and my direction is Europe, France," added Ndab, who travelled through Nigeria and Niger to reach North Africa.

She is one of 247 people, including 15 children, living at the Red Crescent centre in the southern town of Medenine.

The facility is the only one in Tunisia to host migrants who reached the country illegally, either being picked up by authorities near Libya or in waters off the country's coast.

The three-storey building is overcrowded, with just half the number of beds needed and three kitchens and bathrooms for everyone.

Francis Lele, a fellow Cameroonian, said each person receives a kilo of rice, three tins of sardines and a bottle of milk per week.

"Tunisia does not properly take care of migrants," said the 32-year-old, who told AFP he was enslaved in Libya and forced to work in construction before boarding a boat for Europe.

But despite the cuts, centre head Mogni Slim said the food allowance is sufficient.

"It's not a great luxury but we offer food in accordance with the normal calorie intake," he said.

- Rejecting European plans -While Tunisia is striving to manage its migrant population, the European Union has suggested the country could play host to a "disembarkation platform" to process those rescued at sea.

The proposal made to North African countries by the EU in June was swiftly rejected by Tunisia, Morocco and Egypt.

At the end of July, Tunisia said it would take in 40 migrants rescued by a commercial vessel but -- wary of setting a precedent -- said it was only for humanitarian reasons.

A number of those saved by the Tunisian-flagged "Sarost 5" ship were taken in by the Medenine centre.

Romdhan Ben Amor, from the Tunisian Forum for Economic and Social Rights, said Tunisia cannot become a reception country while it "does not guarantee the rights of migrants".

Even for sub-Sahara African migrants who move to Tunisia by legal means, it is incredibly complicated to obtain a residency permit which is essential for daily life in the country.

When it comes to those who have entered Tunisia illegally with the aim of travelling onwards to Europe, the United Nation's migration agency said the country is ill-equipped to manage these arrivals.

"Tunisia has neither the legal framework nor the humanitarian infrastructure nor the economic development necessary," said Lorena Lando, from the UN's International Organization for Migration.

At the Red Crescent centre, residents have 60 days to decide whether to voluntarily return to their home countries or to stay in Tunisia.

The centre head said around a third choose to go home, often worn out by experiences in neighbouring Libya. The remainder opt to remain in Tunisia, with the ultimate aim of travelling onwards to Europe.

But it is not only migrants from elsewhere who take the perilous sea journey across the Mediterranean, in rickety smugglers' boats.

With an unemployment rate of 15 percent and struggling public services such as healthcare, Tunisia is seeing its own residents leave the country.

So far this year Tunisia was the fourth country after Syria, Iraq and Guinea for nationals crossing into Europe, accounting for seven percent of arrivals, according to figures from the UN refugee agency, or UNHCR.

Back at the Medenine centre a 26-year-old Egyptian, Ali Ibrahim Nadi, said they share the same plight: "They want to leave their country, so do we, we want to depart for Europe."