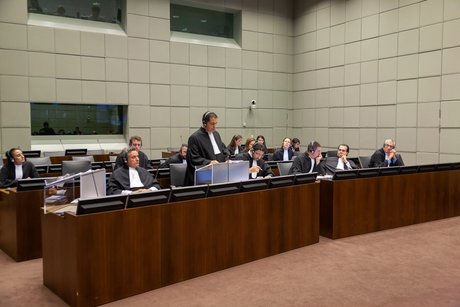 Defense lawyers for Hizbullah suspect Hassan Merhi on Tuesday suggested that ex-PM Rafik Hariri's top security guard Wissam al-Hassan should be considered a suspect in light of his unusual absence from Hariri's convoy on the day of the Feb. 2005 attack.

“He might be a suspect, seeing as he was a key official in ex-PM Hariri's security detail who did not show up on the day of the bombing... This raises suspicions and doubts, which pushed al-Hassan to present an excuse and justify his absence by saying that he had an exam at the time,” Merhi's defense said at a closing arguments session at the Special Tribunal for Lebanon's headquarters in The Hague.

The STL is trying four Hizbullah suspects in absentia after it accused them of carrying out the attack on Hariri's convoy.

“It was unusual that he decided to take the exam although he could have succeeded without it. He was the head of ex-PM Hariri's security detail, or in other words the top security authority in all his movements,” the defense added.

“The Prosecutor has not presented any evidence or convincing excuse to prove that al-Hassan had taken an official exam. I personally don't know the type of exam he took. That's why we have suspicions as a defense team. We are objective and the evidence does not at all suggest that he had a legitimate excuse or certain alibi not to be present in Hariri's convoy on the day of the assassination,” the defense went on to say.

Separately, Merhi's defense said the Prosecution's evidence exhibits are insufficient regarding Ahmed Abu Adas, the Palestinian young man who was allegedly abducted by two Hizbullah suspects to appear in the video of the “false claim of responsibility.”

“We do not rule out that Abu Adas was present at the crime scene for three reasons. The first is that evidence revealed that the crime scene was largely contaminated and the investigations and analyses were all shameful, which allows us to conclude that not all human remains were collected for examination. Secondly, some of the remains were invalid for identification. Thirdly, Abu Adas' character is of no value in the Prosecution's hypothesis and the evidence it has presented lacks any verification value,” the defense added.

The defense also announced that by the end of its closing arguments, it will be able to prove that “Abu Adas was present” and that “his claim of responsibility was not fake but rather real.”

"Wissam al-Hassan should be considered a suspect"
But southern, you also said that Israel killed Wissam Al Hassan?

That's right Patty how silly of us not to notice.. Israel is behind it for sure. And that is why that famous Israeli agent AKA Jamil Sayyed, who Hezbollah just elected to parliament, ordered the very next day a quick clean up of the scene of the bombing.. He even brought in a bulldozer to remove the wreckage and pave over the evidence of your Israeli involvement. Thank god for then interior minister Sleiman Frangieh who thwarted your Israeli plan to destroy further evidence when he ordered Jamil Sayyed to stop what he was doing and to remove the bulldozer. But seriously Patty, are you still pissed at Wissam al-Hassan for catching Michel Samaha and Bashar Assad's terrorist plot to sow sectarian strife in Lebanon? And to answer your question Wissam al-Hassan gained the status of martyr for his trouble.

Are your blades sharp for tomorrow’s horror show?