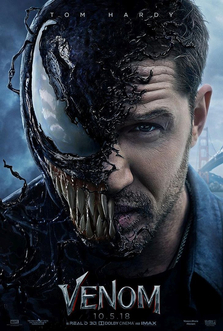 "Venom" took in $35 million for the three-day weekend, while the well-reviewed "Star" from Warner Bros. had $28.4 million in ticket sales.

"Venom" stars Tom Hardy as a journalist who becomes the superpowerful host for an alien symbiote. His character is a villain in the "Spider-Man" world.

The film also stars Michelle Williams, and has had strong global ticket sales.

"A Star Is Born," the third remake of a 1937 film by the same name, marks the directing debut of actor Bradley Cooper.

He plays a hard-drinking country/rock musician who falls in love with a young singer played by pop superstar Lady Gaga, only to see her star rise as his tumbles.

Because of its adult-skewing audience, analysts predict a long run for the film, which recounts Neil Armstrong's journey to the moon in 1969.

Fourth place went to Sony's "Goosebumps 2: Haunted Halloween," which had ticket sales of $15.8 million. The family-friendly sequel, based on the children's book series by R.L. Stine, stars Wendi McLendon-Covey and Madison Iseman.

In fifth was Warner Bros. animation "Smallfoot," with earnings of $9.1 million.

The comic film flips the usual Bigfoot tale on its head, telling the story of a group of Yeti terrified when they come across a human. Voices are by Channing Tatum, James Corden, Zendaya, Common and others.

Rounding out this weekend's top 10 were: