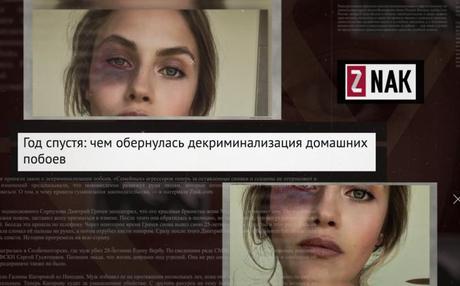 Russian police dismiss victims of domestic violence and a recent softening of the law in this area has left women even more vulnerable, a Human Rights Watch report said Thursday.

The report, based on interviews with dozens of victims, details extreme assaults including women being choked, punched and burned by their attackers. Others were pushed off balconies and out of windows.

The report noted "significant gaps in Russian legislation" such as a lack of a separate criminal charge for "domestic violence", and a culture of victim blaming. Police treated victims "with open hostility," it said.

And it described how the Russian government recently softened penalties for some domestic violence cases to an administrative fine, as it embraced "traditional values" such as keeping families together whatever the cost.

The 2017 legislative change decriminalized a first offense of battery among family members, which amounted to "a green light for domestic violence," the report said.

Lawyers and staff at hotlines and shelters "noted an increase" in those seeking help, it added.

The 84-page report, titled "I can kill you and no one would stop me", featured interviews with women throughout Russia who had experience domestic violence.

One of the 27 female victims interviewed told HRW how she had been repeatedly beaten by her husband.

She only tried to file a police report when he brought home several axes and a large bag that he said was "for her and her daughter's body parts."

But the police "had a laugh and that was it", said the woman, who ended up fleeing her husband to a different city.

Another woman said she had reported physical abuse to police 20 times but was ignored.

Police only reacted when she responded in self-defense as her husband tried to choke her, the report says.

They both filed criminal complaints, but hers was dismissed. She has been fighting the case against her for more than a year now and fears she will lose custody of her daughter.

Several cases have made headline news in Russia recently, raising awareness of the issue.

In December last year Margarita Gracheva's husband Dmitry took her to a forest where he tortured her and chopped off both of her hands, only one of which doctors have managed to reattach.

She had filed a complaint over threats of violence to police a month before but they ignored it. Her husband is due for trial this week for grievous bodily harm, kidnapping and threatening murder.

In a case currently handled by Zona Prava NGO, another woman, Yana Savchuk, called the police when her partner threatened to kill her in 2016.

A female police officer came to record complaint but left without doing anything else, telling Savchuk: "Don't worry, if you get killed, we'll come to register the body."

According to the NGO, which is now trying to bring the officer to account, Savchuk was murdered five minutes after being left alone with her abuser.