Harry and Meghan Step Out in Matching Skirts in Tonga 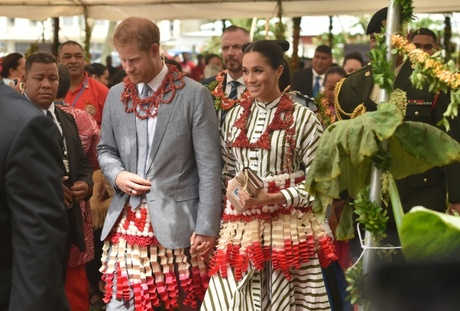 Prince Harry and wife Meghan donned matching red and cream unisex skirts Friday as they wrapped up a four-day Pacific island trip in Tonga with a celebration of local crafts and culture.

The emphasis has been on Meghan's fashion choices during her first international tour since marrying into the British royals last May, but Harry cut a dash with a tasselled skirt worn over the outside of his suit.

Pregnant Meghan wore an identical garment high on the waist, covering her baby bump, as the pair toured a craft market in the island kingdom's capital Nuku'alofa.

The traditional skirts are a status symbol worn during formal occasions by both men and women in Tonga.

The warm welcome received by the royal couple during their travels in Tonga and Fiji this week continued, with local Iunisi Fotofili struggling to express her feelings at being in Meghan's presence.

Crowds turned out in their thousands in Fiji and Tonga, eclipsing the numbers seen on the first week of the couple's Oceania tour in Australia.

She changed to a casual blue Veronica Beard shirt dress for a visit to an environmental project at Nuku'alofa's Tupou College.

At a banquet hosted by Tonga's King Tupou VI and Queen Nanasipau'u on Thursday night, Harry said the island nation was "a magical setting".

"Coming to Tonga I feel very much as though I am coming to visit an extended family," he said, reading a message from his grandmother Queen Elizabeth II.

"It gives me great pleasure that my grandson and his wife are visiting the kingdom of Tonga," the Queen's message said.

"Our two families have enjoyed a deep and warm friendship over many years and I hope that our close relationship continues with the next generation."

After less than 24 hours in Tonga, they return to Australia later Friday for the final days of the Invictus Games, the Olympic style sporting event for wounded soldiers that Harry helped found.

They will then end their marathon 16-day tour in New Zealand.