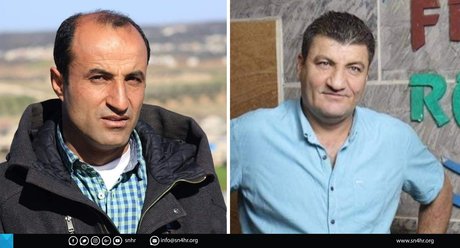 Two activists critical of both the regime and jihadists were gunned down Friday in Syria's last major rebel bastion in the northwest of the country, their radio station and a monitor said.

Citizen journalist Raed Fares and Hamod Jnaid were "shot dead by unknown assailants riding in a van in the town of Kafr Nabel" in Idlib province, Fresh FM said on its Facebook page.

More than half of Idlib and the surrounding region is controlled by Hayat Tahrir al-Sham, an alliance led by jihadists of Syria's former al-Qaida affiliate, while most of the rest is held by pro-Turkey rebels.

The Islamic State (IS) group also has a presence in the province.

Targeted killings and kidnappings have for months plagued Idlib, with angry residents blaming all sides.

The Syrian Observatory for Human Rights, a Britain-based war monitor, said the two men died of their wounds from the attack, for which there was no immediate claim of responsibility.

"They were famous for their criticism of rebels committing violations or arresting civilians, especially when it came to jihadist groups," Observatory chief Rami Abdel Rahman said.

"Both have several times been detained by Hayat Tahrir al-Sham," he said.

Throughout Syria's seven-year uprising, Fares has been known for his often humorous signs in English and Arabic criticizing President Bashar al-Assad's regime.

Fares founded Fresh FM in 2013 to counter "fundamentalist narratives" in Idlib, he has said, after which he was repeatedly targeted by armed groups.

IS militants raided the radio's offices on several occasions, but it was also bombarded by regime forces, he wrote in an op-ed for the Washington Times in June.

"In 2014, I almost lost my life when two armed men opened fire at me and shot me in the chest," he said.

"I was abducted four times by al-Qaida militants and released a few days later after being tortured."

Jnaid, who also worked at the radio, was an advocate for freedom of expression and the rule of law.

"I want freedom of opinion. I want to be able to speak and not be scared," he said in a video posted on Facebook earlier this year.

A September deal between regime ally Russia and rebel backer Turkey held off a major regime assault to retake Idlib.

But a buffer zone has yet to be implemented around the region, as stipulated by the deal, after jihadists refused to withdraw from a planned demilitarized area by mid-October.

Syria's civil war has killed more than 360,000 people and sent millions fleeing from their homes since it started in 2011 with the brutal repression of anti-regime protests.

It has since evolved into a complex conflict involving world powers and jihadists.

The war started in 1918 when France seized the region.