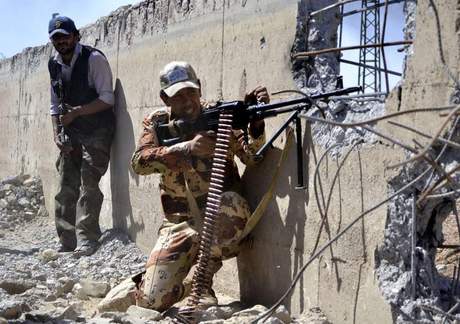 U.S.-backed fighters in Syria suffered record fatalities in an assault by the Islamic State group, a war monitor said Monday, as holdout jihadists kept up a fierce defense of their last Syrian redoubt.

It said a total of more than 200 people have been killed since around 500 IS fighters burst out of the fog shrouding the area in eastern Syria near the border with Iraq to launch their deadly assault on Friday.

According to the Syrian Observatory for Human Rights, 92 of the dead were fighters from the Syrian Democratic Forces (SDF), the Kurdish-led ground units that have spearheaded the U.S.-backed fight against IS in Syria.

At least 61 jihadists and 51 civilians, mostly their relatives, also died in the violence which saw U.S.-led coalition air strikes help the SDF recover positions it had briefly lost.

The jihadists used suicide bombers, suicide commandos and sleeper cells in the countryside around their bastion of Hajin to inflict maximum damage, it said.

"It's the largest number of SDF fighters killed (by IS) in a single battle since it was founded" in 2015, said Observatory chief Rami Abdel Rahman.

Abdel Rahman said the latest deaths brought to 452 the number of SDF fighters killed since the start of their offensive on the Hajin pocket on September 10.

The jihadists have been putting up fierce resistance from their remote Euphrates strongholds, the last rump but also the hard core of a once sprawling "caliphate" that straddled Iraq and Syria.

Most of their recent forays and their deadliest attacks have come as a result of weather conditions hampering the coalition's ability to launch air strikes.

The coalition said in a statement on Saturday that its strikes had been limited due to the weather.

Abdel Rahman said local tribal fighters opposed to IS also helped the SDF take back the positions they had lost on Friday.

The Observatory, which relies on a vast network of local sources, said the death toll continued to soar on Sunday as many bodies were discovered.

The IS propaganda agency Amaq had released a statement Saturday claiming to have killed 60 enemy fighters and captured 30.

According to the Observatory, a total of 284 civilians have been killed since the start of the attacks on the IS pocket two and half months ago.

Most of them have died in air strikes, the Britain-based group says. The coalition usually only admits to a fraction of the civilian deaths it is believed to have caused.

The SDF is fighting to retake areas which have no Kurdish presence even as Turkish forces attack its own heartland further north.

Resentment over the failure of their U.S. ally to stop Turkish military action has slowed their advance against IS, whose eradication is proving long and costly.

"The area is mixed between desert and smaller cities like Hajin which makes it tremendously difficult to isolate and contain IS fighters," said Syria analyst Tore Hamming.

He said IS units there could not be surrounded as easily as they were during operations last year against more confined areas like the city of Raqa.

The jihadists have more knowledge and local support than the Syrian government or the Kurds, Hamming said.

He said most IS fighters there were seasoned fighters made even more dangerous by the knowledge they were making a last stand.

"They know that they will either be killed by an airstrike or captured and put into prison if not sentenced to death," said Hamming from the European University Institute.

Kurdish media reported the capture a day before the IS attack of the organisation's second-in-command, but the Observatory could not say if there was any link.

An SDF spokesman contacted by AFP declined to comment on the reported capture of a man named as Osama Abu Zeid and described as IS supremo Abu Bakr al-Baghdadi's deputy.

US airstrikes won us the Vietnam War, I see no reason they shouldn't win us the Syrian war. I may have some of my facts wrong. The idea is, you never go wrong dropping bombs when you're having an anxiety attack about the public finding out what you've been up to all these years. Like in Ukraine now, precisely: the leader has a ten percent approval rating and upcoming election, so he launches a provocation on Russia, calls for European support. What would Lebanon be like if it didn't have such leadership? Palestine? Imagine Palestine with majority rule and minority rights: rule-of-law. It would provide real defense for Jewish lives and culture. What you have now is a guy pouring gas on himself and asking for a light.