Alleged Syria Chemical Attack: Is the Idlib Deal in Peril? 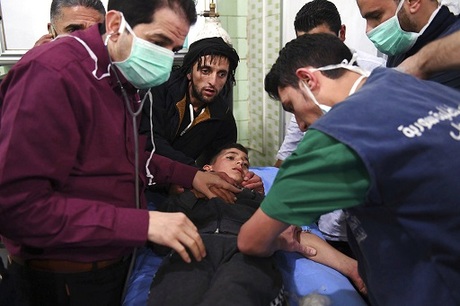 A 10-week-old truce deal in northern Syria looked as precarious as ever Monday after an alleged chemical attack, which has already drawn retaliatory raids despite its origins being unclear.

The exact circumstances of the purported attack on three districts of the government-held city of Aleppo Saturday are murky and bitterly disputed.

In little doubt, however, is the strain the incident will put on an already fragile agreement reached in mid-September to fend off a fully-fledged assault on Idlib.

- What happened on Saturday?

Syrian state media accused "terrorists" of carrying out a "toxic gas" attack in Aleppo late Saturday, using a term that it uses to mean both rebels and jihadists.

The Syrian Observatory for Human Rights put the number of people affected slightly lower at 94, and said over half had been discharged by the next morning.

The Britain-based monitor, which says it gathers its information from people inside Syria, said its sources reported "the smell of chlorine".

An AFP reporter saw dozens of civilians carried or helped into a hospital, appearing to be dizzy and breathing with difficulty. Staff gave them oxygen masks.

The regime has been blamed for the most deadly chemical weapon attacks in Syria's seven-year war, but official media has recently accused fighters in Idlib of planning a chemical attack.

Aleppo city lies just east of the country's last major rebel bastion of Idlib, which a Russian-Turkey deal has protected from a massive regime offensive since September.

More than half of that region is controlled by Hayat Tahrir al-Sham (HTS), a powerful alliance led by the jihadists of Syria's former al-Qida affiliate, who have not commented on the Aleppo attack.

But the National Liberation Front (NLF), a coalition of Turkish-backed rebels who hold most of the rest of the region, have denied any involvement.

The Islamic State group and the al-Qaida-linked Hurras al-Deen organization are also present in the area.

In September, regime ally Moscow and rebel backer Ankara agreed to set up a U-shaped buffer zone around Idlib to keep pro-government forces outside the region of some three million.

But implementation has stalled since jihadists refused to leave the planned demilitarized zone by a mid-October deadline, and sporadic clashes and bombardment have since rocked the area.

Jihadists including HTS control around 70 percent of the planned buffer, according to the Observatory.

On Sunday, Russia said "terrorist groups" inside a part the planned demilitarized area held by HTS had shelled Aleppo.

It said its war planes carried out air strikes against those groups, the first such raids on the planned buffer since the Russian-Turkish deal more than two months ago.

"The attack and then the Russian bombardment clearly demonstrates the weakness of the Idlib agreement," said Aaron Stein, a fellow at the Atlantic Council.

"The Russian response clearly shows that they will not be restrained by the ceasefire with Turkey when its interests are threatened," he said.

Regime forces control around two-thirds of the country, after winning back large parts of it with Russian support since 2015.

Damascus has repeatedly said the Idlib agreement was only a temporary measure until the northwestern region on the Turkish border reverted to government control.

"This affair could be used by the regime, with tacit support or military support from its ally Russia, to retake the whole of Idlib," he said.

"But Idlib is a very complex region to retake and the risks are high," he warned.

Instead, Russia may seek to keep the agreement alive by "forcing Turkey to intervene" against HTS, he said.

"But that would imply Ankara eventually being in control on the ground," he said, a scenario likely not to please Damascus.

Nawar Oliver, an analyst with the Omran Center, said he did not expect a Russia-backed regime ground assault.