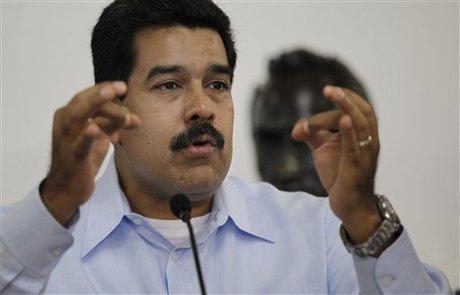 Putin at a meeting at his residence outside Moscow told Maduro "we support your efforts to achieve mutual understanding in society and all your actions aimed at normalizing relations with the opposition."

Putin added that "naturally we condemn any actions that are clearly terrorist in nature, any attempts to change the situation by force."

Hit by low oil prices, mismanagement and the impact of U.S. sanctions, Venezuela is in freefall and Maduro is seeking support from allies after winning a second presidential term this year.

Maduro, who took over following the death of Hugo Chavez in 2013, has come under strong pressure from U.S. President Donald Trump's administration, which calls him a "dictator."

While he won the May elections, most of the international community did not recognize the results. Formally, Maduro's second mandate only begins in January next year.

Maduro told Putin he was sure their talks would bring "good news for cooperation between our countries and for the economies of our countries."

Putin spokesman Dmitry Peskov said ahead of the meeting that Maduro had travelled to Moscow specifically to ask Russia -- itself the target of U.S. sanctions -- for financial assistance.

"The talks will focus on the help that the Venezuelan leadership needs," Peskov told reporters, declining to be more specific on how much Russia could lend.

He said the economic situation in the Latin American country remained difficult but noted "signs of improving dynamics."

Venezuela, which has been rocked by deadly protests and economic chaos, is counting on Russian support amid growing international isolation.

Food and medicine shortages have sparked an exodus of some two million people. The International Monetary Fund projects hyperinflation of 10 million percent next year.

After talks last year between Maduro and Putin, Russia, Venezuela's major creditor, agreed to restructure $3.15 billion of debt from a loan taken out by Caracas in 2011 to finance the purchase of Russian arms.

Largely isolated from the international community, Maduro is now trying to shore up support from his allies.

He was visiting Moscow after hosting his Turkish counterpart Recep Tayyip Erdogan in Caracas.

Russia and Venezuela enjoy a long history of ties and Maduro's predecessor Chavez, known for his passionate tirades against the United States, was a welcome guest at the Kremlin.