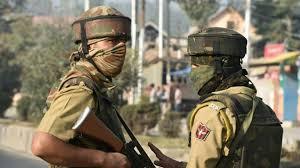 In the latest incident of the region's bloodiest year since 2009, the assailants mounted a surprise attack in Zainpora village of southern Kashmir valley and stole four rifles.

"They (militants) fled the spot with four service rifles from the policemen," Pani said.

Officials say militants have snatched at least 270 weapons, most of them automatic assault rifles, from police officers during similar attacks since 2014. Around 70 have been taken since July 2016.

Kashmir-based rights monitors say more than 500 people have died this year from armed conflict in the disputed Himalayan territory claimed in full by both India and Pakistan, including some 150 civilians.

On Sunday Indian troops shot dead a 14-year-old, the youngest-ever fighter killed in the insurgency, and two other militants including a 17-year-old in a shootout outside the city of Srinagar.

Several militant groups, including JeM, have for decades been fighting about 500,000 Indian soldiers deployed in the territory New Delhi controls, seeking independence for Kashmir or its merger with Pakistan.

According to a prominent monitoring group, the fighting has left more than 70,000 dead, mostly civilians, since 1989.

Kashmir has been divided between India and Pakistan since the Partition of the subcontinent in 1947.