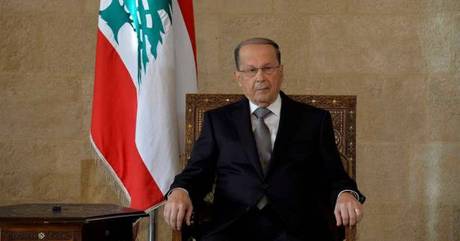 President Michel Aoun is seeking to resolve the government formation gridlock but reportedly insists on naming parties blamed for the obstruction if his mission fails, the pan-Arab al-Hayat daily reported on Thursday.

Aoun has informed his visitors that he will seek to resolve the impasse but plans to reveal to the public and “tell the Lebanese who is obstructing the government formation process,” unnamed sources told the newspaper.

The president lately has held consultations with various parties mainly Prime Minister-designate Saad Hariri, Speaker Nabih Berri and the so-called six Independent Sunni MPs and others in a bid to resolve the more than six months government impasse.

One of the suggestions proposed for Hizbullah's condition to allocate a ministerial seat for one of the Independent Sunni MPs, was to form a government of 24 or 18 ministers instead of 30. But the idea was not “widely” discussed mainly because previous negotiations were based on the distribution of parties’ quotas based on a 30-seat government.

A parliamentary source confirmed to al-Hayat that ​​extending the government to 32 ministers has been totally disregarded. While a proposal to name an independent figure from outside the said six Sunni deputies from President Michel Aoun’s share is being considered.

“The idea of ​​appointing a minister from outside the six Sunni lawmakers was deliberated, mainly that PM-designate (Saad Hariri) is decisive in rejecting any of them. Hassan Mrad, the son of MP Abdul Rahim Mrad (one of the six MPs), was mentioned here, but none of the official sources confirmed an inclination to name him,” the source told the daily on condition of anonymity.

An idea of ​​forming a mini-government was also suggested on Aoun, but he considered this option as “inappropriate” in the current situation, said the daily.

I dare him to name Hezbollah as the obstructors.

Aoun is a coward, a deserter, he won’t name hizbala.

The best 90 year old prez the world's has ever seen ..
Unique phenomenon

true thatsit, hes been a miracle worker look at the state of our nation....

Who’s the worst, bouteflika or Aoun? I beleive Aoun is more senile.

Aoun will win hands down as one of the worst leaders that ever came out of Syria.....