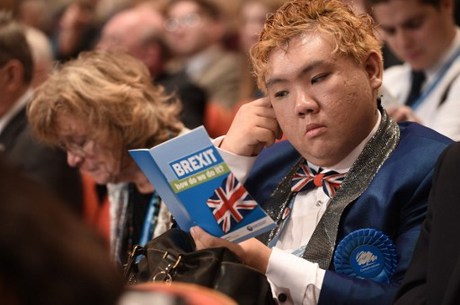 Fears of a chaotic Brexit are "good news" for Neil Powell, a British warehouse business manager who has seen a boom in orders from companies stockpiling to avoid supply problems.

"Usual capacity would be about 85 percent to 90 percent, it is 94 percent at the moment," Powell, general manager of the NX Group in Crick in central England, told AFP.

Brexit "is good news for us," he said, as handlers shifted pallets in one of the company's three warehouses.

"Customers are demanding a lot more space," he said.

The secure warehouse is open 24 hours a day, 7 days a week and is packed to its 13-metre (43-foot) high ceiling with cosmetics, food and computer products.

The company has a total storage capacity of around 9,300 square meters in this warehouse-filled area of the Midlands known as the "golden triangle" of logistics, due to its proximity to several road networks.

Eighty people work for the NX group, five of whom have been recruited in recent months due to the demand.

Powell said he receives constant requests from customers making sure they have enough space and new inquiries "on a daily basis", especially from food companies.

"It's really, really interesting times... We are very positive about what Brexit will bring," he said.

One customer last month requested "double the amount of space... because they believe there's going to be a hard Brexit and they need the space," he said.

With less than three months to go before Britain leaves the European Union on 29 March 2019, all scenarios remain open, from a negotiated exit with the EU to a total rupture which would threaten turbulence in supply chains.

"Whatever the result of Brexit, whether it is hard, soft deal or no deal we do expect some form of interruption in the supply chain," said Peter Ward, president of the UK Warehousing Association, which brings together more than 750 companies in the sector.

"In an overall sense, this is good news for the sector because more warehousing is going to be needed."

But the British vote in June 2016 to leave the EU has also had negative consequences for the warehouse business.

Rising fuel prices because of the fall in the value of the pound and the departure of East European workers on whom the industry relied "really heavily" have hit the sector hard, Ward said.

East European workers represented around 35 percent of the low-skilled labour in the industry before the referendum, but now only make up around a quarter after many returned home or tried their luck in another country, he explained.

The "Brexit factor" has thus accentuated the existing problem of manpower shortage, he said.

In the Midlands, the NX group employs 15 Moldovans and 10 Poles, working as handlers, drivers and office workers.

"Excellent workers. I'd like to keep the same employees on the same contracts," said Powell, adding of Brexit as a whole: "I don't think it will be so easy."