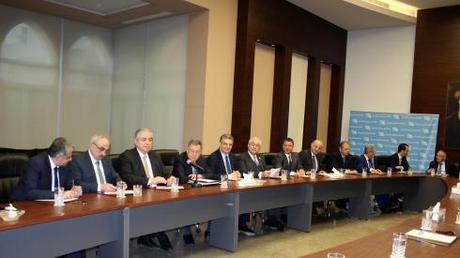 Al-Mustaqbal parliamentary bloc on Tuesday lashed out at the speeches that were delivered Sunday in the Chouf town of Jahliyeh at a memorial service commemorating ex-minister Wiam Wahhab's slain bodyguard, describing them as a “message” from “behind the border,” in an apparent reference to Syria.

In a statement issued after its weekly meeting, the bloc condemned “the campaign of incitements, insults and cheap language that was carried out by sides that gathered in the town of Jahliyeh.”

They “insulted the dignity of major symbols of the state and they questioned the missions and responsibilities of judicial and security leaders,” Mustaqbal added.

And describing the “campaign” as part of the “messages that are being implemented with directions from behind the border,” the bloc underscored that “the Internal Security Forces Command, the position of the state prosecutor and all legitimate state authorities will not be easy targets.”

Separately, the bloc lauded “the Presidency's efforts and measures to secure the success” of Beirut's upcoming Arab economic summit, condemning “the calls, stances and tensions that have surrounded the summit and that are part of internal overbidding that has nothing to do with the national interest.”

It said such stances had “harmed the ability of Lebanon – as a state and legitimate institutions – to deal with a major event such as the Arab economic summit.”

“Taking to the streets to express objection and removing the Libyan flag from its pole and burning it was a move that harmed the image of the Lebanese state and did not benefit the cause of disappeared imam Moussa al-Sadr,” Mustaqbal added, referring to anti-Libya protests staged by AMAL Movement supporters.

And while noting that the state “should give importance to” Sadr's “vital case” and “always take into consideration the sensitivity that one of the country's main components has” towards it, the bloc slammed “calls for postponing the summit over the failure to invite the Syrian regime to it.”

“Such calls inflame the sentiments of vast components of the Lebanese people and violate the minimum requirements of joint Arab action and the Arab League's mechanisms in this regard,” Mustaqbal added.

The State should focus on all missing Lebanese, not just one imam who was a citizen like any other citizen. Berri’s Thugs should be arrested by the ISF or the General (in)Security ,let Mustaqbal prove to us that our institutions are still somehow relevant.

They “insulted the dignity of major symbols of the state and they questioned the missions and responsibilities of judicial and security leaders,” Mustaqbal added.

and you and your party of the past enabled them and are their partners.

Thanks for highlighting that Marcus they have no more integrity and now have the audacity to state they are insulted? How about the 4.5MM Lebanese who are insulted daily by the same faltering leadership and con men who claim they are fighting the cause? Sadly les Blue is corrupt as Orange and Yellow and Green, its time the people stood up against these so called leaders and con artists and threw them into the dumpsters they belong in. Insulted indeed....