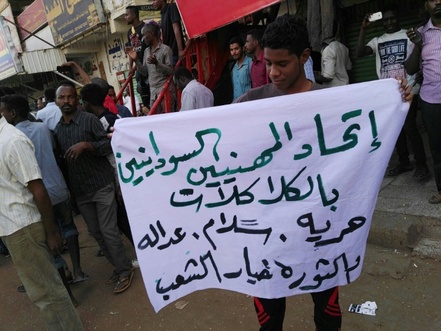 Watching Sudan's desperate and deadly anti-government protests from afar, many in the Sudanese diaspora in Paris say they are rooting for the demonstrators who are challenging President Omar al-Bashir.

"Everybody here supports the uprising," said Gouda Abdul Karim of the deadly rallies that have rocked Sudan since December 19, when angry people took to the streets in several towns to denounce a government decision to triple the price of bread.

"This government has only a few days. People go because it's better to die in the streets than of hunger in houses," the 32-year-old insisted to AFP at a cafe in northern Paris.

He is one of some 20,000 Sudanese in France, according to government figures, with many in the diaspora keen to show their support for demonstrations in Sudan, which have swelled into nationwide anti-government rallies and left at least 24 people have died.

Analysts say that these are the most serious threat to Bashir in his three-decades in power, but so far there are no signs that his rule is crumbling, and the Sudanese leader insisted on Monday that the demonstrations "will not change the government."

But opponents are trying to seize the moment.

"I share information on Twitter or Facebook to support the movement. That's the only thing I can do," said Karim, who says he fled the country in 2012 after having refused to continue working for a senior regime figure.

Sudanese police fired tear gas at demonstrators in the town on Kassala on Wednesday, a day after authorities launched a similar crackdown in the capital Khartoum against protesters chanting "Peace, justice, freedom".

On January 7, the town was also the scene of a rally in support of Bashir.

Although the unrest was triggered by the rise in the price of bread, Sudan has faced a mounting economic crisis over the past year, led by an acute shortage of foreign currency.

Repeated shortages of food and fuel have been reported across cities, while the cost of food and medicine has more than doubled.

"Every Sudanese knows somebody in the uprising," said Amed Weelingkwe, a salesman in a Paris mobile phone shop.

But he said he does not believe that it will be easy to wrest power from Bashir, who seized control in an Islamist-backed coup in 1989.

Bashir is wanted by The Hague-based International Criminal Court (ICC) to face charges of genocide and war crimes allegedly committed in Darfur, where a brutal conflict erupted in 2003 as ethnic minority rebels took up arms against Khartoum's Arab-dominated government, accusing it of economic and political marginalization.

He "will not leave without strong guarantees," Weelingkwe said.

Indeed, Bashir is planning to run for the presidency for the third time in 2020 elections.

Rights groups say more than 1,000 people have been arrested in a crackdown by security agents since the recent protests began, including opposition leaders, activists and journalists as well as demonstrators.

Mohamed Eltegani said his best friend had been detained for 20 days because he was involved in organizing demonstrations.

"What is absolutely necessary to say is that the government uses extreme violence," said the 66-year-old at a busy restaurant popular with the Sudanese diaspora in Paris.

But he is confident that Bashir cannot cling on in the face of such strong protest.

"Every day that passes, the demonstration is bigger," he said.

Several rallies have been held in a central Paris square and in front of the Sudanese embassy to show support for the protests.

Protest organizers have called for a march on the presidential palace in Khartoum on Thursday, along with simultaneous demonstrations in several cities including Port Sudan, Gadaref and Madani.

Although Darfur has been largely calm since last year, there were rallies on Sunday in Niyala and El-Fasher, the capital of North Darfur state.

"The problem is not Bashir. We want to change all the system," Abdelkarim said.