For Sudan Women, Protests are a Fight for Their Rights 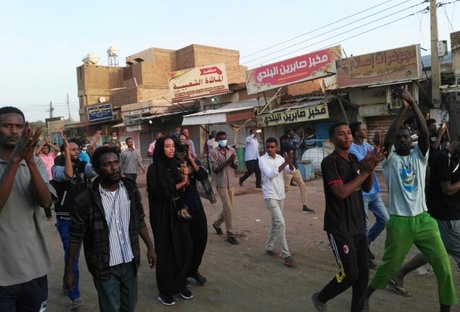 Sudanese protester Aseel Abdo said she had to leave her family home after being threatened with arrest for joining demonstrations against President Omar al-Bashir that have rocked the country.

"I will continue to protest, even if it takes years to bring down this regime," said the 26-year-old, who has marched along with hundreds of people in the anti-government demonstrations in Khartoum.

Deadly protests have rocked Sudan since December 19 when angry crowds first took to the streets after the government tripled the price of bread.

Women have joined in even as the protests turned against the government and escalated into bloody confrontations in which officials said at least 24 people have been killed.

Dressed in headscarves, they can be seen in nearly all of the footage of the protests shared on social media, which in turn has helped to convince even more women to take to the streets.

Clapping, ululating and whistling, women have been seen encouraging fellow demonstrators to press on with the rallies even when clashes have erupted between police and protesters.

Many who live in areas where the demonstrations are staged have been seen offering tea and juice to protesters as they pass by, witnesses said.

For Abdo, it was a strong desire to fight for women's rights that made her want to take part in the demonstrations.

"This regime has some of the worst laws against women," Abdo told AFP, speaking over WhatsApp for safety reasons.

"You could be arrested for wearing trousers or if your scarf is not covering your hair properly."

Abdo, who carries a first aid box to protests to help those who are injured, said she has been changing her residence every few days to avoid arrest.

Hundreds of women have been sentenced to flogging under a controversial public order law in Sudan, activists said.

The decades-old law, they add, also imposes punishments including hefty fines and jail terms, and targets mainly women, including those selling tea on the streets of Khartoum.

A Sudanese court sparked outrage last year when it sentenced teenager Noura Hussein to death for the "murder" of her husband, who she accused of raping her after a forced marriage.

An appeals court later commuted the death sentence to a five-year jail term, after the case drew international condemnation.

Hussein's plight put the spotlight on issues facing women in Sudan such as marital rape, child marriage, forced marriage and the arbitrary application of Islamic law, along with tribal traditions that often target them.

The protests have given a new voice in the fight for women's rights, said Emad Badwai, a mother of two and a regular at the anti-government rallies.

"When I chant 'Freedom, peace and justice,' I'm hoping to see an end to discrimination against women," she said.

For Abdo there is also a deep-rooted grievance that motivates her to protest.

"Bashir's regime has committed the worst crimes against the people of Darfur," said Abdo, who hails from the western region torn by a devastating conflict.

The war in Darfur erupted in 2003 when ethnic minority rebels took up arms against Khartoum's Arab-dominated government, accusing it of economic and political marginalization.

The United Nations said about 300,000 people were killed and another 2.5 million displaced, most of them still living in sprawling camps.

Bashir has been charged by The Hague-based International Criminal Court with genocide and war crimes allegedly committed in Darfur.

Abdo said she had started a non-governmental organization to oppose child marriage in Darfur, but authorities immediately shut it down.

"They told me that my place was in the kitchen and I should wash dishes," said Abdo.

Observers said the protests have managed to unite people from different tribes and ethnicities.

"In these protests, I have seen my fellow Sudanese transcend above the embedded racism in our society," said Babiker Mohamed, a Washington-based humanitarian aid official.

"Protesters chanting 'We are all Darfur' while marching in the streets gives us all hope that change is inevitable."

For Badawi it was indeed time for a change in Sudan.

"Even my 11-year-old son is surprised to know that President Bashir has been ruling for 30 years," she said.