Bassil Hits Back at Franjieh: 'Servile People are Stabbing Us in the Back' 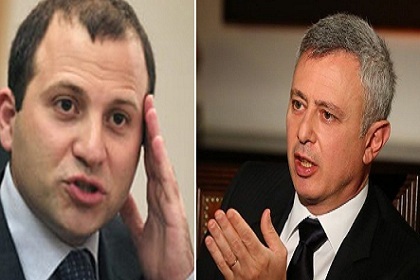 “Some are fighting to regain rights and some have surrendered and are totally submissive. They only fight the fighters. They are stabbing in the back and in the flanks, but they are not stabbing us but are rather stabbing people and their rights. Until when shall we remain silent and patient?” Bassil added, in an apparent jab at Franjieh.

Earlier in the day, Franjieh had reiterated his rejection of granting President Michel Aoun and the FPM 11 ministers in the new government, or what constitutes a so-called one-third-plus-one veto power.

“We, as a Christian group, are against granting the one-third-plus-one veto power for those who want to use it against the rest of Christians,” he said.

The Bkirki summit on Wednesday had witnessed bickering between Franjieh and Bassil, who said that “the one-third-plus-one veto power would strengthen the country, the state institutions and the President.”

Franjieh hit back, saying “the one-third-plus-one veto power will be used against the Lebanese Forces and Marada.”

Two of the stinkiest and nastiest politicians of this banana republic called Lebanon.

syrian filth arguing among each other