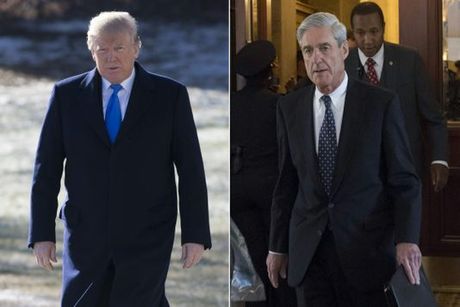 Special Counsel Robert Mueller's office took the rare step Friday of disputing a news report on his Russia investigation, saying a BuzzFeed article alleging that US President Donald Trump directed his former lawyer to lie to Congress is "not accurate."

Trump's lieutenants had already strongly pushed back against the report, which said that the president ordered Michael Cohen to lie about a Russian skyscraper project they pursued during the 2016 election.

"BuzzFeed's description of specific statements to the Special Counsel's Office, and characterization of documents and testimony obtained by this office, regarding Michael Cohen's Congressional testimony are not accurate," spokesman Peter Carr said in a statement.

Mueller's investigation into Russian interference in the 2016 vote and possible collusion between Trump's campaign and Moscow is the subject of frequent articles and even more frequent speculation.

But it is extremely rare -- if not unprecedented -- for Mueller's office to issue such a statement.

BuzzFeed's editor-in chief however said the news organization stood by its work.

"We stand by our reporting and the sources who informed it, and we urge the Special Counsel to make clear what he's disputing," Ben Smith tweeted.

The statement was nevertheless a cause for celebration for the president, who retweeted numerous supporters slamming BuzzFeed and later wrote it was "A very sad day for journalism, but a great day for our Country!"

"Fake News is truly the ENEMY OF THE PEOPLE!" he added, a now familiar refrain when talking about critical media.

Trump's lawyer Rudy Giuliani had earlier called the allegation in the BuzzFeed report "categorically false" in a comment sent to several White House reporters, while Deputy White House Spokesman Hogan Gidley labeled the report "ridiculous." He said Cohen is someone "who now quite frankly has been proven to be a liar."

Democrats in Congress had pledged to investigate the report to see if the president had committed an impeachable felony.

"These allegations may prove unfounded, but, if true, they would constitute both the subornation of perjury as well as obstruction of justice," said Adam Schiff, the chairman of the House Intelligence Committee.

BuzzFeed reported late Thursday that Cohen, who worked for Trump for more than a decade, has told investigators that the president personally instructed him to lie about the Moscow Trump Tower plan in testimony in 2017 to the House and Senate Intelligence Committees.

The BuzzFeed article was based on interviews with two anonymous "federal law enforcement officials" who are familiar with Cohen's testimony to the investigation led by Mueller.

"Any suggestion -- from any source -- that the president counseled Michael Cohen to lie is categorically false. Michael Cohen is a convicted criminal and a liar," Giuliani said in a statement quoted by New York Times reporter Maggie Haberman.

"Lying to reduce his jail time!" Trump said on Twitter of Cohen, who was convicted last year of fraud and perjury.

No other media have confirmed BuzzFeed's reporting.

It came two months after Cohen pleaded guilty in a New York court to making "false, fictitious and fraudulent" written testimony to the House and Senate intelligence committees in August 2017 in connection with the Moscow project.

A statement of the facts in his November 29 plea deal with Mueller's prosecutors suggested that his testimony had been prepared in consultation with unnamed people in the White House.

Cohen had told the two committees that the Moscow project talks ended in January 2016, when in fact, as he later admitted, they went on at least six months longer, to June 2016 when Trump had already secured the Republican nomination for president.

Cohen had also testified that others in the campaign, including Trump, were not informed about the project.

But in the November plea deal, Cohen also admitted the project had been discussed with Trump -- designated "Individual 1" in court documents -- several times in early 2016.

"Cohen made the false statements to minimize links between the Moscow project and Individual 1... in hopes of limiting the ongoing Russia investigations," prosecutors wrote.

Cohen was the president's right-hand man for years at the Trump Organization, the umbrella company, often relied upon to quietly fix difficult problems and negotiate deals for the real estate mogul.

But he turned on his former boss after he was charged with giving hush money to women alleging affairs with Trump ahead of the 2016 election -- payments that violated campaign finance laws.

Cohen, who has been sentenced to three years in jail, said Trump ordered him to make the payments, and now says he regrets his work for the president.

While Democrats could not confirm the BuzzFeed report, they said they were poised to further probe the allegations.