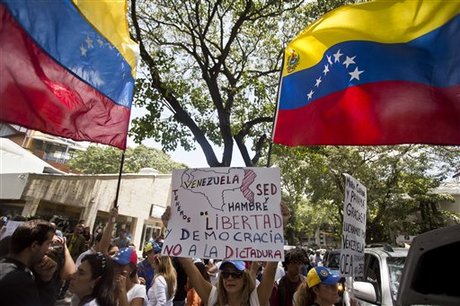 Venezuelan oil output has plunged by more than half in 30 years but the country still sits on the world's biggest crude reserves, so any political changes will ripple worldwide.

The International Energy Agency estimates Venezuelan reserves at 303.2 billion barrels, "but much of its oil is extra heavy, which is costly to extract," an IEA report said.

Output has fallen from more than three million barrels per day in the 1990s to 1.339 mbd last year, according to OPEC data.

Venezuela is an OPEC member and currently holds the cartel's annual rotating presidency.

Venezuelan output has been hampered by chronic under investment by the nationalized oil company Petroleos de Venezuela SA (PdVSA).

At the end of September, only 25 wells were in operation, compared with almost 70 in early 2016 according to the U.S. Energy Information Agency (EIA).

"The oil industry is in disarray, the national oil company is run by an army official, trained personnel is hard to find and foreign service companies refuse to commit themselves to projects due to payment backlogs," PVM analyst Tamas Varga commented.

The head of French oil giant Total, Patrick Pouyanne, agreed that operating in Venezuela is difficult.

"The situation there is not easy," he said. "Frankly, for the past two or three years my priority has been my worker's safety."

The oil executive also underscored "difficult access to water, and electricity" in Venezuela.

In the event of a change in government, global oil prices could rise in the short term, but decline as time goes on, analysts believe.

Venezuelan President Nicolas Maduro counts on support from the army to counter-balance international backing for parliament speaker Juan Guaido, who has proclaimed himself interim president.

That standoff is likely to underpin crude oil prices.

"Any disruption in Venezuelan oil supply will be felt by the market, especially by U.S. Gulf refiners who rely on this heavier crude oil," ING analysts noted.

Potential U.S. sanctions against Maduro's government or serious unrest in the country could cut the country's crude exports.

Once the initial pain had passed however, "an end to the Maduro regime would pave the way for urgently-needed investments in the Venezuelan oil sector," Commerzbank analysts commented.

"Iraq is a good example of how opening a country up to investment can affect oil production –- output there has doubled to 4.5 million barrels per day in the last ten years," they explained.

"A regime change in Venezuela would thus have a dampening effect on oil prices in the medium to long term," the analysts concluded.