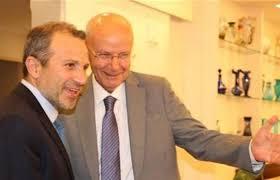 Free Patriotic Movement chief MP Jebran Bassil has agreed to give up the one-third-plus-one veto power in the new government as part of a deal reached with Hizbullah, media reports said on Wednesday.

“Bassil has given up the 11-minister share in return for getting the environment portfolio,” MTV reported.

“An obstacle is revolving around the portfolio that Speaker Nabih Berri will get in return for giving up the environment portfolio,” the TV network added.

It also said that an agreement has been reached between Bassil and Hizbullah secretary-general's aide Hussein Khalil over the issue of the Consultative Gathering's representative in the government.

Under the reported agreement, the chosen minister would “exclusively” represent the Gathering and would vote alongside it in Cabinet but would also attend the meetings of Bassil's Strong Lebanon bloc “as a formality,” MTV said.

It also said that some Gathering members are accusing the candidate Hassan Mrad, the son of Gathering member MP Abdul Rahim Mrad, of striking a deal with Bassil to attend his bloc's meetings.

“Mrad will attend the meetings to spare Bassil the embarrassment,” MTV added.

Progressive Socialist Party sources meanwhile told LBCI television that the party has not been approached regarding the industry portfolio.

“Our participation in the government is hinging on the industry and education portfolios,” the sources insisted.

“He has three choices: either to carry a cabinet line-up to President (Michel) Aoun or to step down or to hold a press conference to expose those blocking the government,” the sources said.

The issue of representing the Hizbullah-backed Consultative Gathering, a grouping of six Sunni MPs, has delayed the formation of the government for several months now. There are also disagreements over the distribution of portfolios and previous disagreements over Christian and Druze representation had also hindered the formation process before being eventually resolved.

Agreed. with one exception they "Sold our future". What a banana republic...

I love how the so called representatives strike up these deals on behest or more aptly stated the cost of the people. What in blazes will they every do for Lebanon? Functionality speaking nothing will change but another shift to another majority in Parliament that will keep the nation deadlocked for the next umpteen years. Havez el Assad must be happy looking down from his "heavenly" window....

Our self styled strong president and his strong block have managed weaken the Christians even further making "المثالثة" a fait accompli. What he's failing to understand is that for Hezbollah, "المثالثة" is only a first step. What they want goes way beyond "المثالثة".
When Aoun was appointed PM by Amine Gemayel his the sole duty and task was to help elect a new president. Something along the lines of what General Chehab did in 1952. Instead this is what Aoun had in mind:

He's well on his way to accomplish it.

and you ve got SOSeash love tunnel

Under the reported agreement, the chosen minister would “exclusively” represent the Gathering and would vote alongside it in Cabinet but would also attend the meetings of Bassil's Strong Lebanon bloc “as a formality,” MTV said.

Bassil has an ego way beyond his lowly size.