In the U.S., Dreams of a 'Big Bang' for Health Insurance 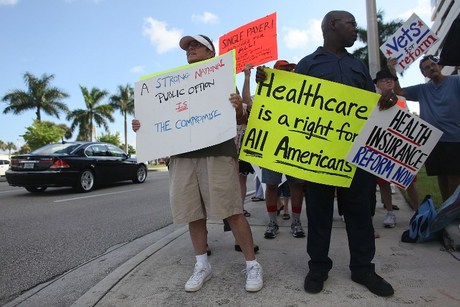 Having a health insurance card in America is no guarantee of medical care without the risk of financial ruin.

One must take care to choose a doctor or hospital that is part of a pre-approved network. Estimate how much would be paid out of pocket after hospital bills that can reach tens of thousands of dollars. And, for Americans covered by their employers, be careful about any change in jobs and try to avoid risky gaps in health insurance coverage.

The complexity of this public-private system, the continuing climb in prices and the fact that 27 million people go without health insurance have led numerous Democratic candidates for a White House bid in 2020 to propose a radical solution: a European-like system.

Except they don't say it quite in those words.

Vermont Senator Bernie Sanders, who came up with the idea, California Senator Kamala Harris and New York Senator Kirsten Gillibrand are among those calling for "Medicare for all," or offering everyone in the nation the type of public insurance offered to those over 65, a program in existence since the 1960s.

Americans have an ambiguous relationship with the federal government when it comes to their health.

The idea of universal public health care goes back to before the first World War, according to Howard Markel, professor of the history of medicine at the University of Michigan.

After the second World War, fears of communism did away with the project, leaving instead a system founded on employer-provided health insurance. But many gaps had to be filled over the following decades by the government.

Today, government health insurance covers about 112 million Americans -- one third of the population -- according to the Kaiser Family Foundation.

This includes the elderly, the poor, the disabled, children, and former military service members.

Some 157 million Americans get insurance through their jobs -- about half the country.

The rest are either not insured or have bought their own private insurance plans.

"A lot of people are satisfied until they get sick," said Tricia Neuman, senior vice president and director of the program on Medicare policy at the Kaiser Family Foundation.

Her colleague, Karen Pollitz, says problems typically include surprise medical bills, accidentally going out of network without realizing it, rising deductible and copays and out of pocket expenses.

When Sanders proposed his "Medicare for all" platform in the runup to the 2016 election, Democratic challenger Hillary Clinton dismissed the idea as impractical in the current political climate.

But the climate has changed.

That's in part because former president Barack Obama's health care reform law, which passed in 2010, did not fully bridge this gap in health care.

And health care costs have continued to climb faster than the U.S. economy can keep up. The United States spends 18 percent of its gross domestic product on health, compared to 11 percent on average in other wealthy nations.

And finally, it's because Republican-led efforts to replace "Obamacare" have met with difficulties. Turns out, it's quite a challenge to cover everyone, while lowering prices, and sticking to a private health insurance system.

The main advantage of a single-payer system would be that Medicare could negotiate lower rates than those typically agreed between insurers and hospitals, according to economist Colleen Carey, assistant professor of public policy at Cornell University.

"Medicare has a good take it or leave it bargaining position with regard to health care providers for hospital and physician services," she said.

"If they use that power, that would really hold costs down."

Americans on both sides of the political aisle tend to be fans of Medicare.

More and more say they are open to expanding it to people beginning at age 50 (77 percent, according to a Kaiser Family Foundation poll), or even to all (56 percent).

But support begins to crumble at the prospect of raising taxes to finance universal coverage, particularly among those who already pay health premiums for their employer-provided coverage.

"All of sudden 158 million people are going to be seeing a cost in the form of a tax that they weren't really seeing before. That's a big difference culturally," said Sara Collins of the Commonwealth Fund, a think-tank.

Not to mention the resistance mounted by powerful pharmaceutical companies and health care lobbying groups, which wield considerable influence in Congress.

Even if a Democrat is elected to the White House in 2020, a major health care revolution is anything but certain.

"Right now it's a dream, a good dream. It's something you have to keep pushing for," said Markel.