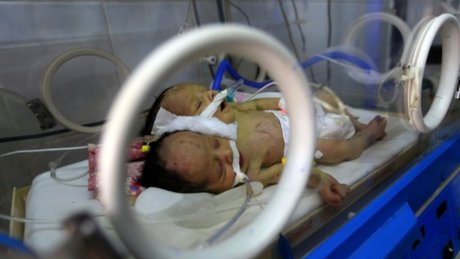 A Saudi medical team has offered to treat Yemeni conjoined twins following a plea from doctors in Yemen's blockaded rebel-held capital for the newborns to receive specialist care abroad.

Abdelkhaleq and Abdelkarim were born outside Sanaa around 10 days ago and share a kidney and a pair of legs but have separate hearts and lungs.

The head of paediatrics at Sanaa's Al-Thawra hospital, Dr Faisal al-Babili, said his department lacked the facilities to treat or separate the newborns and appealed on Wednesday for help from abroad.

Late on Wednesday, the head of Saudi Arabia's King Salman Aid and Relief Centre, Abdullah al-Rabeeah, said he had a team that was prepared to treat them.

He said arrangements were being made to transport Abdelkhaleq and Abdelkarim from Sanaa to the kingdom "as soon as possible", the official Saudi Press Agency reported.

Rabeeah said the team would study the possibility of separating them.

Rebel-held areas of Yemen have been under blockade by a Saudi-led military coalition since it intervened in support of the beleaguered government in March 2015.

Health services have collapsed as the conflict has ground on and most hospitals are not equipped to provide specialist treatment for rare conditions.

Hostility to Saudi Arabia runs high in rebel-held areas that have been hit hard by coalition air strikes, while the coalition has granted few exemptions from its long-running blockade of Sanaa airport.

Since 2015, some 10,000 people have been killed and more than 60,000 wounded in the conflict, most of them civilians, according to the World Health Organization.

Human rights groups say the real figure could be five times as high.

The conflict has pushed some 14 million people to the brink of famine in what the United Nations has described as the world's worst humanitarian crisis.