Russia 'Repatriates' 27 IS Children from Iraq 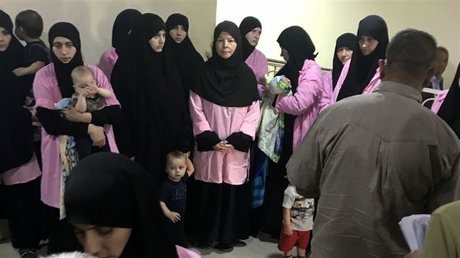 A Russian official said Sunday that Moscow had repatriated a fresh batch of children whose mothers are being held in Iraq for belonging to the Islamic State group.

Thirty other children were sent back to Moscow in late December.

The fathers of the children were killed during three years of fighting between the jihadists and Iraqi troops, the official said.

IS seized large swathes of Iraq in a lightning 2014 offensive, before the government dislodged the jihadists from urban centers and eventually declared victory in December 2017.

The Kremlin announced in early January that 115 Russian children aged below ten -- along with eight aged between 11 and 17 -- were still in Iraq.

Iraqi law allows detainees to be held with their offspring until the age of three, but older children have to live with relatives.

In November, Kheda Saratova -- an adviser to Chechnya's authoritarian leader Ramzan Kadyrov -- estimated "around 2,000" widows and children of Russian IS fighters were still in Iraq and neighboring Syria.

Around one hundred women and children -- mostly from Caucasus republics -- have returned to Russia so far.

Most of those convicted are Turks or originate from former republics of the Soviet Union.