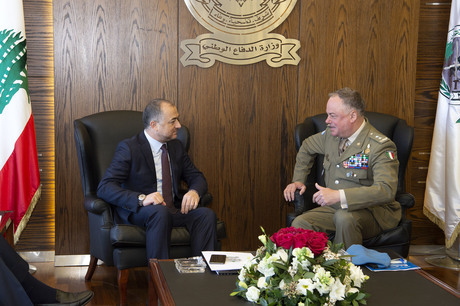 UNIFIL Head of Mission and Force Commander Major General Stefano Del Col on Monday held his first meeting with the newly appointed Lebanese Minister of Defense Elias Bou Saab in Beirut to discuss the situation in the UNIFIL area of operation and the continued cooperation with the Lebanese Armed Forces (LAF).

While congratulating Bou Saab on his appointment, Del Col said the U.N. mission is looking forward to advancing UNIFIL-LAF cooperation in south Lebanon. He also briefed the Minister on the situation in UNIFIL’s 1,060-square-kilometer area of operation and along the Blue Line, “which continues to remain calm,” UNIFIL said in a statement.

Del Col expressed gratitude for the “continued support of Lebanese authorities in the implementation of UNIFIL’s mandate,” the statement added.

During the meeting, the UNIFIL head also reiterated the U.N.’s call for the LAF to “undertake follow-up actions on the recently discovered tunnels north of the Blue Line.”

Separately, in line with U.N. Security Council resolution 2433, adopted in August 2018, Del Col stressed the importance for the LAF to “scale up the rapid deployment of its Model Regiment in south Lebanon.”

“UNIFIL is engaged with a variety of potential donors to facilitate this process; however, at the same time it is vital that the LAF be seen as prioritizing this effort,” he said. He also called on the LAF to build a “right-sized and sustainable naval component.”