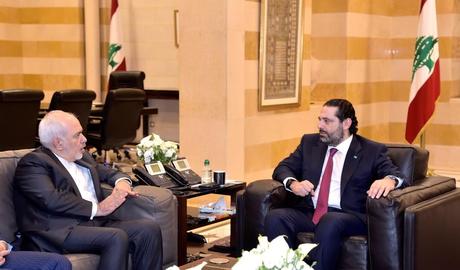 A statement issued by Hariri's office said the Grand Serail meeting tackled the local and regional situations and the bilateral ties between the two countries and that the meeting was held in the presence of Iranian Ambassador Mohammad-Jalal Firouznia and ex-ministers Ghattas Khoury and Bassem al-Sabeh.

“During the meeting, Minister Zarif relayed the Iranian president's congratulations on the formation of the Lebanese government, adding that Iran wishes it success in its revival program,” Hariri's office said.

“He also expressed his country's willingness to help Lebanon in the fields that the Lebanese government might specify,” the office added.

Hariri for his part thanked Zarif, underscoring that “the government's revivification program is based on the interest of the Lebanese people and Lebanon's higher interests,” noting that “Lebanon respects its pledges and commitments towards the Arab and international community.”

The talks also tackled “the regional situations, especially what relates to the Syrian refugee issue, and means to achieve a safe and dignified return for the refugees in Lebanon.”

“At the end of the meeting, PM Hariri inquired about the Iranian government's response to his calls for the release of the Lebanese citizen Nizar Zakka who is jailed in Iran, stressing the need to end the case in a positive initiative towards Zakka's family and the Lebanese people in general,” Hariri's office said.

“Minister Zarif promised him to follow up on the case,” it added.

“Minister Zarif promised him to follow up on the case,” it added. Iran does not have him like KSA they have camera pictures of him leaving Tehran and heading for Barbados....