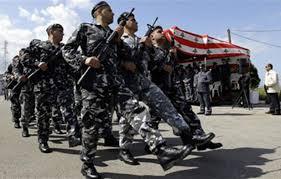 The defendants are accused of “collaborating with networks for forging and circulating currency and others involved in human trafficking,” the National News Agency said.

They are also accused of “dealing with gambling rings, abuse of power and smuggling fugitives in return for sums of money.”

The officers who were interrogated Monday were Colonel Wael Malaeb, Colonel Johnny H. and Major Charbel H. Eleven other personnel were also questioned.

The interrogations will continue on Tuesday.

Judge Ghada Aoun had on Thursday ordered the interrogation and detention of the officers and personnel after ISF chief Maj. Gen. Imad Othman gave a permission for their prosecution.

Progressive Socialist Party leader ex-MP Walid Jumblat had objected to the suspension of one of the officers – Colonel Wael Malaeb – lashing out at Othman, Prime Minister Saad Hariri and other political forces over the move.

Jumblat stressed that he supports the enforcement of the law but urged Othman to “eradicate all corruption at his directorate” and to ensure a “transparent probe” in the case of Malaeb and his colleagues.

“And if he has the ability, he should rein in the major scandals at Beirut’s airport, where perhaps there are regional balances,” Jumblat added.

Free Patriotic Movement chief MP Jebran Bassil has defended the prosecution of the five officers, describing them as a “gang.”

“If every time a corrupt official is prosecuted the issue will be depicted as an attack on a sect and its leader, this means that accountability will not target any corrupt official,” Bassil has said.

“Corruption has no sect and there should be two sects: the sect of corrupts and the sect of upright people,” Bassil added.

“It is unacceptable to face political protections whenever we want to hold someone accountable,” the FPM chief went on to say, wondering if it is “required that we stay as we are until the collapse of the country.”

“The officers gang that you are hearing about comprises Druze, Shiites, Sunnis, Maronites, Greek Orthodoxs and all sects, so why don't they all enter prison? Why is the issue being depicted as being targeted against a certain party while it is comprised of everybody?” Bassil added.

“If every time a corrupt official is prosecuted the issue will be depicted as an attack on a sect and its leader, this means that accountability will not target any corrupt official,” Bassil has said unless they belong to Kizballah or Orange peel like some of the past who were dismissed as innocent people and or Israel was blamed for it.