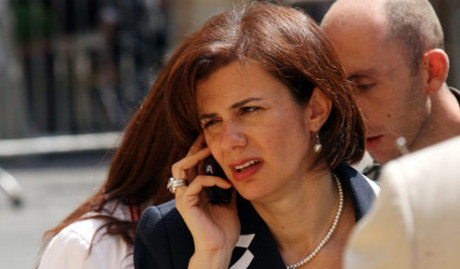 In the memo, al-Hassan said illegal and violating kiosks and street vendors are “obstructing traffic and causing traffic accidents on highways and public roads, while some of them do not meet the hygiene and public health requirements.”

“Some of them are also being used in illegal acts such as facilitating immoral acts and selling narcotics,” the minister added.

“Most of them are set up without permissions or written approvals from the municipalities while some of them have municipal permissions but lack licenses to sell alcoholic drinks,” al-Hassan said.

She accordingly gave a five-day deadline for lawbreakers to remove the violations.

Al-Hassan's first move as interior minister was the removal of concrete blocks protecting the ministry's building in Beirut's Sanayeh area. The blocks had obstructed the flow of traffic in the area for around five years.

Al-Hassan is the country's and the Arab world's first female interior minister. She has welcomed the challenge, saying Prime Minister Saad Hariri put his trust in her and gave her "this big responsibility."

"As the first female minister of interior, I have to prove the woman's ability to assume an exceptional portfolio," she said at the handover ceremony from her predecessor, Nouhad al-Mashnouq, who had been in the post for five years.

She should make the streets car free instead of focusing on them because they obstruct traffic. As for promoting immorality, I think the ministers and MPs are on the top of the list. I’m not saying nothing should be done but obviously she got her priorities wrong.

My dilemma is the following, should we go easy on her because she’s a woman or the opposite should we criticize her as much as her predecessor and colleagues because we’re all equals.

Well, her inheritance will certainly be half of what her brothers will get....

Stop complaining for once... traffic is one of the biggest if not the largest problem in Lebanon. If it takes you double the time to get someplace, that is quite sad that you believe this is not a problem!
Don't complain if you don't have the logic to figure this out - you certainly don't drive or have a job in Lebanon to experience this huge mess and problem!

Traffic isn’t the problem, it’s the symptom of a much deeper pathology.
Of course commuting is hellish, but many people take their cars for 500m because there is no proper infrastructure for pedestrians I.e. trottoir. Secondly, where are the tramways, subways and trains? Why does a family have one car per member, what about sharing? I stopped using the car and leave it for the weekend to get the groceries and to visit friends and relatives in other cities. It’s much faster and healthier to walk. Taking the few pennies away these kiosk make isn’t going to solve any of your problem, it’s only gonna make the poor people poorer and they will resort to violence and crime to make ends meet. We have too many cars.... a heavy jomrok or prohibitive gas prices could help address the problem.

Do you think they will also remove the kiosk from the Republic of Dahieh?

That's all fine and dandy and is 'superficial', but can she deal with real issues like arresting shia drug lords, armed militias, etc.

Bless her for trying to make change however where are the priorities here? She could start by cleaning her own backyard first (governmental offices) that is strife with everything from bribery and corruption to pure wasta to getting anything as mundane as an ID to car documentation. Pick your battles wisely in Lebanon Minister start with the big hitters get someone like Imbecile behind bars for the millions he has stolen and leave the little Beera store alone.