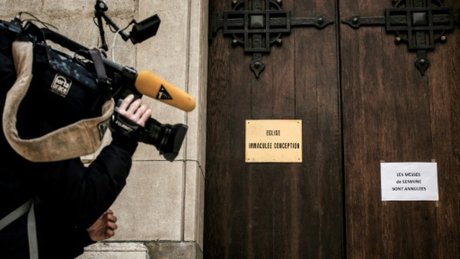 A French court Monday approved cinema screenings of an award-winning director's new film about the real-life story of a priest accused of sexually abusing boy scouts, even though the case has yet to come to trial.

The 73-year-old priest, Bernard Preynat, had argued that a public release of the film, "By the Grace of God", could prejudice his case.

The film by screenwriter and director Francois Ozon won the jury prize at the Berlin film festival this weekend.

It will hit the screens in France on Wednesday, a day before Pope Francis holds a summit meeting of bishops at the Vatican to discuss the sex abuse of minors by clergy members.

The film, which Ozon worked on in secret for years, tells the story of the scandal which broke in 2015 when a former scout, Francois Devaux, went public with allegations that Preynat had abused him as a child 25 years earlier.

Preynat was suspended by the church that year, and it eventually emerged that his cardinal, Philippe Barbarin, had confronted him about "the rumors" in 2010 but the priest claimed he had changed.

Four years later Barbarin, who is now archbishop of Lyon in southeastern France, informed the Vatican about the case but did not tell the police.

The 68-year-old cardinal and five former aides have recently been tried for their part in the cover-up and a verdict is expected on March 7.

No date has yet been set for Preynat's trial.

The film's title comes from Barbarin's exclamation of relief that the abuse was thought to be covered by the statute of limitations.

It tells the story of the scandal while sticking closely to its emotional impact on three victims-turned-activists, who begin to confront their trauma publicly with the support of their families.

It follows another high-profile dramatization of the systematic cover-up of sexual abuse by the Catholic Church in the 2015 Oscar-winning "Spotlight", which was set in Boston.

Ozon said the reaction from several French bishops and senior clergy who have seen the film had been positive, adding that he hoped it would provoke debate beyond France.

Ozon changed the names of the victims in the film, but not those of Preynat or Barbarin.

He argued that everything in the film had already been reported in the press, and that Preynat had confessed to the abuse of around 80 boys.

A lay voluntary worker for the Lyon diocese, Regine Maire, also issued a legal challenge to have her name removed from the picture. Another court was considering this matter on Monday.