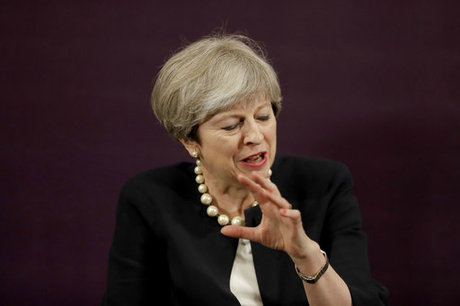 The British government on Monday rebuffed U.S. President Donald Trump's call to take back alleged UK jihadists captured in Syria and try them at home.

Trump tweeted on Sunday that Washington was "asking Britain, France, Germany and other European allies to take back over 800 ISIS fighters that we captured in Syria and put them on trial".

His comments came with diehard Islamic State group fighters trapped in the last pocket of their crumbling "caliphate" in Syria.

Prime Minister Theresa May's spokesman said the fighters should be put on trial in places where they committed their crimes.

"Foreign fighters should be brought to justice in accordance with due legal process in the most appropriate jurisdiction," Downing Street said.

"Where possible, this should be in the region where the crimes had been committed."

The spokesman added that London continued "to work closely with our international partners on this."

U.S. allies have been grappling for weeks with what to do with foreign fighters detained in the war-ravaged country by the Kurdish-led Syrian Democratic Forces.

The issue's urgency was raised in Britain after a London school girl who joined the Islamic State in 2015 resurfaced in a Syrian refugee camp last week.

Shamima Begum told British media she wanted to come back to London to raise a baby she gave birth to this weekend.

UK security officials said they could not block Begum's return since she had never been convicted of any crimes.

But they did not rule out prosecuting her upon her arrival.