After IS, Ammunition among the IV Drips at Syria Clinic 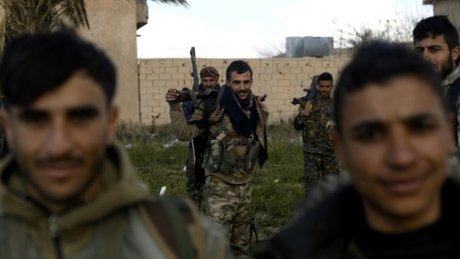 At a clinic in eastern Syria, the Islamic State group have fled leaving a floor strewn with medical supplies -- but also explosives and a foreign passport.

U.S.-backed fighters took the three-story building in the village of Baghouz in recent days, and now use its roof to survey the frontline against the jihadists.

After a months-long campaign, the last IS fighters are pinned down in their last scrap of territory just hundreds of meters down the road in the same village.

In the former field hospital's courtyard on Monday, a red stretcher lay abandoned.

Under three mounds of earth, the U.S.-backed Syrian Democratic Forces had buried a woman and two IS fighters found wearing ammunition jackets.

Inside the building, an intravenous solution drip was still hanging from a wall, near stacks of brown mattresses and colored blankets.

"This is where they used to put their wounded," said the 20-year-old.

Around the medical facility, bandages, oxygen masks, tubes, bags of intravenous solution, medicine, and papers were scattered all over the floor.

But among them are also plastic bags stuffed with small black triangles.

"They'd use these in their explosive devices," Jabbar told AFP.

Among the disarray of papers, the SDF had found a handwritten work rota.

"Morning shift", "Evening shift", and "ER team", someone had scrolled in blue ink, near the names of doctors and nurses on duty.

Among the listed staff were foreigners -- "Abu Hamza the Iraqi" and "Abu Ayub the Tunisian", as well as Syrian names.

The papers written in Arabic showed those scheduled to work in the pharmacy, the laboratory, maintenance, and on guard duty.

IS declared a "caliphate" spanning parts of Syria and Iraq in 2014, imposing its brutal interpretation of Islam on millions.

In the early years, before several offensives chipped the proto-state down to its last half a kilometer square, the extremist group attracted thousands of foreigners.

In the Baghouz clinic, one appeared to have left behind his passport.

It said it belonged to a Tunisian who would be 29-years-old, and was stamped with an entry visa to Syria via Turkey dated January 6, 2013.

There was also the election card of a Baghouz resident harking back to 1997.

The Kurdish-led SDF have uncovered IS prisons, police stations, and even propaganda centers as they have taken one town after another from the jihadists.

Saber, a 23-year-old fighter, said he stumbled on one such broadcasting center for the Al-Bayan radio station just a few kilometers away.

"The place was empty with nothing inside except for a small sign saying Al-Bayan," he said.

On the roof of the hospital, Saber looks out onto what is left of the jihadist group's "caliphate".

"We can hear them speaking on their walkie-talkies but we don't always understand them," said the fighter, with a thick black beard.

"Some speak in a foreign language."

A fellow fighter behind him, wearing an ornate scarf around his head, agreed.

"Sometimes they speak in code, saying things like "Immigrant 3' or 'Immigrant 5'," he added.

From the rooftop, white and blue tents could be seen scattered over hundreds of square meters in the last jihadist patch by the Euphrates River.

The SDF estimate hundreds of diehard jihadists to be holed up in the last pocket.

But they have been moving cautiously in recent days, as they say IS fighters have been using hundreds of civilians remaining there as "human shields."

"The important thing for us is to get out all the civilians... Then we'll be able to win, and go home," he said.

On the outskirts of the village, a fresh group of SDF fighters step off two buses into lines, awaiting their orders.

On their way out, fellow combatants were elated to be going on leave just as the "caliphate" is expected to fall.

"We're feeling so great. We've wiped them out," said Majid al-Sheikh, a fighter in his twenties.